I love Bollywood, Reader, it makes it so much easier for me to find titles for my posts...
Anyway, as you might have guessed, this post is (once again) going to be about the latest movie I watched. The said movie being a Bollywood musical, called Aaja nachle (come on and dance), and starring Madhuri Dixit and Kunal Kapoor (also sometimes called hmmmmmm Kapoor

, and filling at least three of my most important criteria for getting my phone number: he's three feet tall (at least!!), very very handsome, and he probably likes curry. He has been seen with a golden cape, but I must say his use of it was not nearly as impressive as Gerard Butler's mastery in The Phantom of The Opera. Besides, he plays in Rang de Basanti, which is morally wrong (I'm not kidding, there). He still deserves his picture here, however. And the "backside" tag for this post... It must be mentioned however that his pet-name is Kunnu, which is ridiculous as such, but even more ridiculous if said with a French accent (double backside tag for this post.) I'm going to stop talking about Kunal Kapoor, now. Promise.
So, Aaja Nachle... It's a movie about a woman who's trying to save an old monument in her indian hometown of Shamli, by winning a bet she made with a man who wants to build a mall in its stead (in stead of the old monument.) (Following, Reader? I have a feeling this post is not quite as clear as it should be...) (maybe I should stop using brackets, really, I don't think it helps...) Of course, it works, of course, it's not very original, but the soundtrack is really good, and the dancing is amazing, and the actors are... (CRAP! I said I wouldn't!!!) 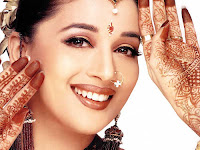 Let's start again. The scenario would not win any originality prize. Nor would it win any prize at all, now that I come to think of it. It is, however, a really good movie, with cool dialogs, and as I said, Madhuri Dixit plays in it, which is a sufficient condition to make me watch it twice. You might remember Madhuri Dixit from Devdas, if you have seen it. If you haven't you should be watching it now, not reading some stupid blog. Except if your name starts with an MAR and ends with an ION, cause then you have the DVD.
Madhuri Dixit, in Devdas, plays Chandramukhi, the prostitute. She's the one that looks like she is alive. As opposed to Aishwarya Rai (Paro) who's the one who looks like she's unbearably beautiful and must come from another planet. Madhuri Dixit, on the other hand, is impossibly beautiful, and the most expressive dancer and actress that I've ever seen. She's really amazing, dancewise, and she can talk with her eyebrows. I wish I could.
Anyway. Aaja Nachle was a good Bollywood movie, the first I've seen in a little while, and really, if you have a chance, watch it. Kunal Kapoor will be grateful... And so will you, for the sight...
Publié par Claire à 15:02

Watch it twice, OK... mais watch it WITH YOUR SISTER ?

I love hindi songs!Check out freehindilyrics.com it has awesome lyrics from thousands of songs.

Thank you so much for commenting! I tried to check out your blog, but there seem to be a problem with the link on your profile! Thanks anyway, and thank you for the tip about lyrics too, it's great, and it might help me improve my Hindi too!!

Have a nice day!