I think my Fate and Destiny will be to go to Berlin next year, for a year. What do you think about that, reader? One year in Berlin... I think it's exciting. I think they have Dunkin Donuts, in Berlin...

Anyway. I was looking through my stuff the other day, and found a bunch of doodles I did while working over the last two years. Since I haven't posted anything here in a while, I figured I might as well share, and also, maybe it will reassure you as to my ability to draw. It's not always as bad as what I manage to do with Paint. Sometimes, it's worse (ha ha ha)... 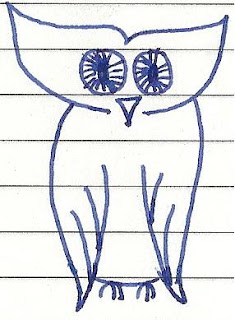 That's an owl. It's trying to keep its eyes wide open during a particularly boring speech. 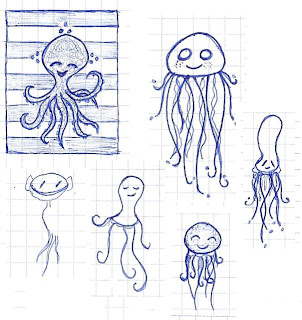 That's a bunch of jellyfish. And an octopus.

That's me at different times of the day. Really cool job, this one, but a little... let's say intensive. 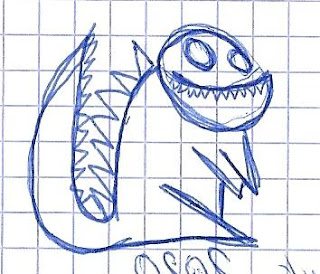 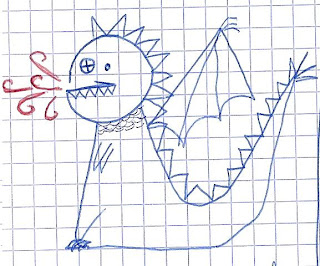 That's a dragon and his big dragon buddy... 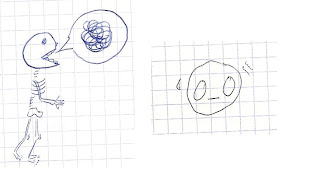 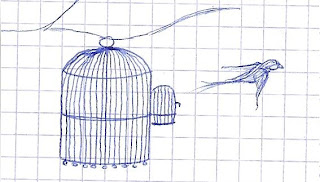 That's when it's time to go home

I have no idea what that is. It says "let's talk about shrimp". NO IDEA. No memories about it whatsoever. This is very strange.

Sadly, I lost my notepad from Copenhaguen, into which I had drawn a lot. I also complained about people dressed as yaks, the fact that no one was listening and the cold, and wrote down some of the weirdest things I heard over there. And I did hear some really really weird stuff. Well reader, there we are, I am back to France for a little while before going to Belgium on brand new adventures! Wonder what will happen when I come back from there, I tell you... I have so no plans at all, I am starting to make some to move to New Zealand and become a sheep farmer.

So, yeah. Over and done with Stuttgart, where I actually spent about three days over the two and a half months I was in Germany, since I actually lived nearer Böblingen. Still, I'll say Stuttgart, it's bigger and more well known.

I hate leaving. I hate packing, I hate saying goodbye, I know it's not very original, but it's true. I've kind of had enough saying "see you soon" to people while knowing I won't, actually. I've had enough of leaving, but I've not had enough of going places, and I still am always happy to come home, so I guess I'll have to deal with some more of that sooner or later...

Still, as you say goodbye, you like to look back on the good things that happened while you were away, so here are 5 things I loved about living in Germany over the past two and a half months.

1. My roommate. Now it would be a long post if I had to go over the details, but my roommate was great. He enlightened me about Bärchenwurst (sausage shaped as a little smiling bear. Would you agree to say it's a little wrong?), Dosenwurst (tinned sausage --very wrong, no argument there), Schweinskopfsülze (you don't even want to know), powdered little bugs swimming in vitamin-flour (still not over this one), death metal underground punk dark clubs, how to use my blinker, cinema from modern-time eastern Germany, quite a lot of music, the difference between Abend and Nacht, Nacktschnecken (a slug, in German, is actually officially called "a naked snail". Is it not great, reader?) the difference between a star and a faraway plane and many, many other things. For all this thanks, very sincerely. And if you hear me, which you don't, mach's gut. Please.

2. The cool people I met. An incredible quantity of cool people. A special mention to H. our really great "nearly-neighbour", fun and interesting and welcoming, and his friends B and G with whom I had many great evenings, to B, my roommate's best friend, who is quite simply amazing and whom I wish I had had time to know better, here's to V, also, who was very drunk and said, "I am full wie die Badewanne" the night I met him (in so many words, half English, half German. A Badewanne is a bathtub. I suspect it was close to reality). Won me over. And to R, as well, who had, weirdly, an é in his first name, and who made me feel at home even though I was not, and to all those who were patient and OK with repeating things when I had to ask them to. I appreciate it very much. Once again, thanks go to M, my roommate, for helping me meet them all.

3. Much less important, but Subway. We don't have Subways in France (at least, not in my region). We should.

4. The culture of Barbecue. How great is that? I love barbecue as it is, but in Germany, they take it to a whole new level. Marinated meat, amazing sauces, incredible amounts of so called "baguettes", salads and potatoes and potato salads and hanging around in gardens with your friends... What's not to love, I ask you? Ok, maybe smoke and bug bites and smelling like bacon for days, but even smelling like bacon for days can be seen as an advantage. Who doesn't love bacon, honestly?

5. The faraway-so close aspect of Germany. Germany's abroad, there's not denying it, however close the Alsacian culture may be to that of our neighbors to the East, and yet I feel weirdly at ease over there. Also the fact that I could go home and see my friends and my family whenever I wanted was nice. Maybe I'll go back there soon, and visit some other part of the country... More preparation for the European tests in April might still be a very good plan... I heard Hamburg was wonderful... Any advice?
Publié par Claire à 05:49 Aucun commentaire: