Fiiieeeeeewwwh!
I'm back home, and what a week (or a couple of weeks) it's been. I've been to Lyon, Paris, Limoges, Metz, Chalons en Champagne, Troyes, then back home for a night, then Cologne, then Lille, then back home, where I am right now, sitting on my parent's couch, as usual. It's been crazy and exciting and cool, and I wish I had that much to do more often. Maybe not all the time, but it definitely was cool. Maybe all the time would be ok once I get used to the rythm.
Anyway. What I wanted to tell you about today, reader, is Cologne. I don't know if I already told you this, but I intend to go there for a while. As in I don't really know how long. Maybe a few months, maybe a year, maybe less, maybe more, in any case, I want to go there for a while.
Might never even happen, who knows, but it's the plan. And here's why. It's going to be a long post, but there's very little to read. I'm very sorry about the quality, all pictures were taken from my iPhone, and I'm not quite used to it yet. By the way: Thanks go to my best friend V for giving me her iPhone, it's so cool to have an internet access all the time! I love it. 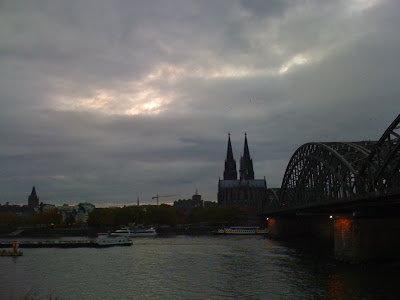 There. Is it not nice? The Rhein, the big bridge and the Cathedral? I like it. The light was a little strange, half grey, half twilight, half sunset (Ok, that would be thirds, then, but you see what I mean). There was a big crowd there, and everyone was rushing back to the city and trying to see the view at the same time, and for a second, I had a weird feeling that all these people, coming directly from the Koelnmesse, men in suits and women in high heels, were about to jump in the river like lemmings. They did not. Anticlimax of the century. 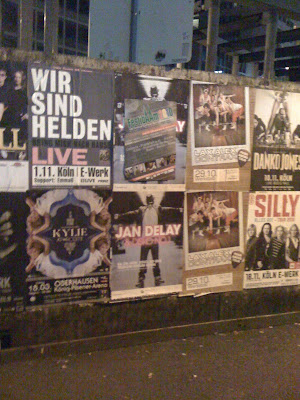 There seems to be quite a lot of things going on as well. Ok, Kylie Minogue and Wir sind Helden may not be my all time favourites, but still. Plenty of concerts. And Charlie Winston was there just yesterday. Besides, I don't really know Wir sind Helden that well, and I'm ready to believe they really are heroes. Who knows. 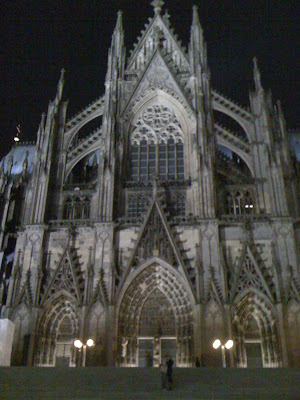 Also, Cologne is apparently in Mordor. And if that's true, then Aragorn can't be far. And that's good, isn't it? 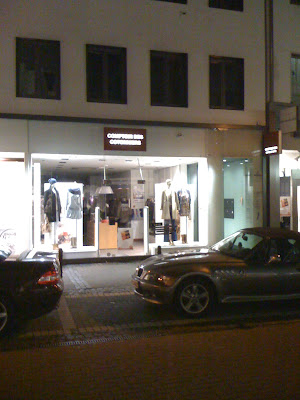 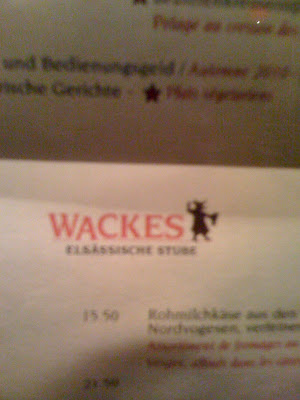 They are not completely barbaric. They know how to live (that's a Comptoir des Cotonniers shop and an "elsässisch" restaurant in case you can't read. It really is very blurry, but it makes me very self conscious to take photographs of ridiculous things when I'm on my own, so I did not take more than one shot.) 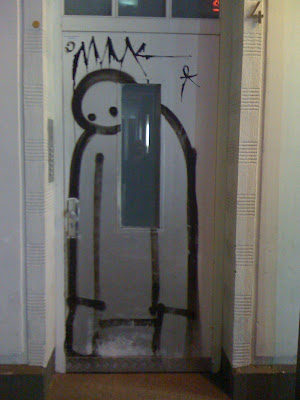 My sister M, who likes this kind of things, will have reason to come and visit me. Is this big guy not awesome? I find him awesome.
And also, also : 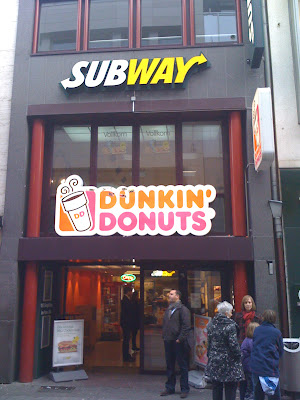 Need I say more? If I ever go, I will come back a different woman. As in 80 pounds heavier.
I have to show you this however. I am sorry, but I have to. Germans will be Germans... 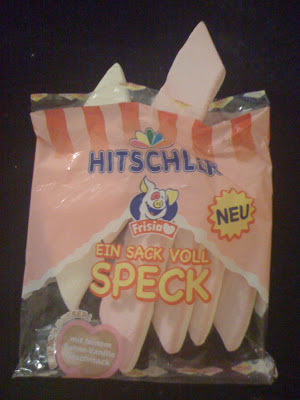 Several things spring to mind when seeing something like this. Things like, "oh Lord, that laughing piglet wants my soul". Things like "A bag full of lard? Really, Deutschland? Is that a marketing concept?". And in case you were wondering, I did buy the bag. I could not bring myself to take a picture of such a ludicrous thing in the shop. So I spent good money on it. Then I figured, hell, it's just marshmallow, and I opened it. And I ate it all. I am full of shame and fake lard.
Have a nice day, now, reader.
Publié par Claire à 03:06 4 commentaires: