Long time since I’ve written here, but as it were, I’m out of Internet. That is, I don’t have the internet at home. That is, I can’t talk to people on MSN live from my room like I usually do. That is, I have to go to cafes or fast food restaurants if I want to do so. So I’ve been spending quite a lot of time in cafes and restaurants. I mean, I’m probably in one right now. Well, I’ll be in one when posting this, but right now I’m sitting on my bed, trying to gather enough motivation to remove myself all the way to the next café, and writing my next blog post, so that I don’t have to write it sitting in said café, a cup of coffee precariously balanced on a tray next to my computer.

I can’t sit down at the Exki without having a little movie running in my head of an old lady walking past and her long cream coloured jacket brushing the tray, and all the coffee getting spilt on my keyboard and my computer going off with a burst of sparks. Have you ever noticed how old ladies have a tendency to wear cream coloured coats? Well they do. In Belgium they do. Which is nice, because it kind of increases the dramatic effect of the espresso dripping all over it, in my little mental movie. Then I get cursed in Flemish and then I start crying and all, and the whole thing usually ends in me being offered a consolation latte by a cute waiter. I try to have destiny be fair with me even when I am watching worst case scenario mental movies.

Anyway, since I spend so much time there, I wanted to tell you a little bit about the Exki. It’s like the Belgian Starbucks. They sell plenty of types of coffees, which is cool, and they also sell stuff to eat, like chocolate mousse and coffee-speculoos tiramisu and also some stuff called some lame name with raspberries and passion fruits and also… well you get the idea. They also do the salty part of meals, and they even sell soup. Wondrous tomato and basil soup. Soup from heaven. If I could, I’d eat there all the time. Only well, I’m but a student. Maybe I should give them my CV!! Who knows! Well, that’s a good idea. Let me try that.

I’ve tried usual fast food restaurants too, of course, only it really sucked, since

a) Eating a Big Mac while typing is just impossible

b) Eating fries near a computer is not good. Not good at all. Especially when you are freaked out like me about putting stuff between the keys of your keyboard. Did I tell you about my previous computer writing 4 between every words and letters I wrote? It4 went4 so4ething4 like4 T4ehat, and made me make terrible typing mistakes because I didn’t want to leave my computer time to write any 4s. So no salt near my keyboard.

c) The music. Oh, No, The Music. You can’t imagine. 2 hours listening to the same stupid rap songs, on a loop. 4 rap songs, I’d say. Including Soulja Boy. Goes like that: ////// YAY \\\\\\ YO////// YEEE \\\\\\\ like that. Funky the first time. Gets annoying after the fifth, I have to say. Even with the little mental choreography that goes with it. There’s only so much my imagination can make up for. French rap largely exceeds my abilities.

There really is no bad thing to say about the Exki. It’s delicious, it’s not too expensive, and they have angels cooking soup in the kitchen. Said angels having, apparently, a taste for discreet pop music rather than crappy French rap. I knew it all along, but now I have proof. Also it smells like ground coffee, which is very good. Even when you don’t like coffee in itself, and I used not to, you’re still bound to like the warm, chocolatey smell of ground coffee. Ah, yes, actually. There is one thing to say against it, it’s that stuff they have with lentils. An undying, eternal love for lentils, which conquers all, even their own good sense (lentil salads, lentil wraps, lentil cakes and lentil soup, I mean, come on. No one likes lentils when they are baked in a healthy, sane way. Lentil without half a pound of butter and a ton of curry paste? No one’s eating that for any other reason than to impress their own conscience)

And also they have a tendency to put raw carrots in stuff all the time, and that makes my mouth itch, and then I sneeze as well, and then the dream waiter in my disaster film is grossed out, and then that’s really bad. But I manage to stay away from lentils and carrots from hell, most of the time, so I really have very little to complain about, as far as the Exki is concerned. As a matter of fact, you might want to come here in Brussels yourself and give it a try! Given that I spend pretty much all my time there, we might even meet! I’ll be the girl laughing to herself in front of her computer. (MSN conversations, you know…) Anyway, it’s time for me to really remove myself from that comfy spot on my bed before I get permanent back damage, and besides, is it me or is this post getting really way too long for the amount of actual information contained in it?

Have a nice day reader! 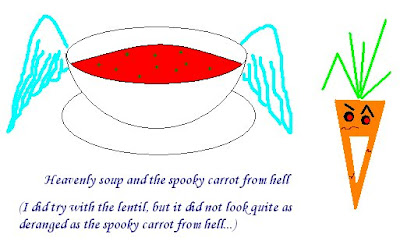