Reader, I've officially had enough. I'm a healthy young woman, and I've been sick for one week in a row, that just cannot be tolerated. Back pains, then a really bad cold and temperature, and today, migraines. Now I'm complaining again. Sorry. Still, I figured, while I am sick, why not let others enjoy a bit of what I learnt over my last 5 or 6 migraines. Could be helpful. Most of these 5 hints would be considered common sense by most. But, you never know. Hence: Top 5 things NOT TO DO UNDER ANY CIRCUMSTANCES when you have a migraine, or feel a real bad one coming up. 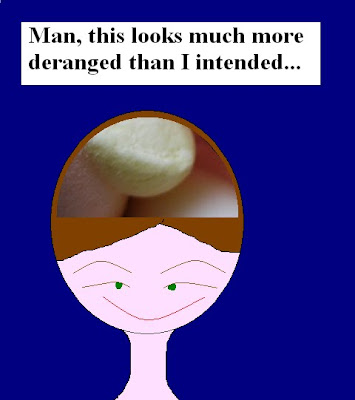 1. Watch Eyes Wide Shut. Now I would say that one of the things NOT TO DO UNDER ANY CIRCUMSTANCE even when healthy is watch a Stanley Kubrick movie, but I might just be mean. I never could watch any until the end, so I suppose I cannot and should not judge. Still, Eyes Wide Shut with a migraine is an even worse idea than Eyes Wide Shut when healthy, and that's saying something. I stopped understanding anything, saw black patches all over the screen, nearly threw up on my Australian cousin, who was home at the time, and then went to bed and cried myself to sleep. One very, very good night for me.

2. Go to you german sight translation course, even though you know you are the only sucker who goes there every week, and you are bound to end up alone and helpless. But I already told you about that one.

3. Pretend you're fine and go have a friendly chat in German with your roommate and his friends. Who are listening to hard style techno music. Makes your head pop. I've come back from the dead to deliver this message to you : No hard style techno music OR German conversation when you have a migraine. What happened to me is what happens to the aliens in Mars Attacks. T'was not pretty, and from above, I can see my roommate trying to scrub the remains of my brains from his scorpions' terrariums. (Sorry, gross)

4. Go for a walk because you figure maybe fresh air would help. Even though the German countryside is beautiful and the cherry trees in full bloom, it will not improve your situation, you will want the stoopid birds to shut up already, and generally hate anyone driving a car.

5. Read those Harper Connelly books by Charlaine Harris. She's the one who wrote the True Blood books, which are great and very funny. The Harper Connelly series is very good too, but much less funny, and much more Stephen King like. Absolutely gross and very dark and cruel. Bad, bad mix when your head already hurts and you just want soothing. I just want soothing, reader. However, the Charlaine Harris book has got me hooked, and I want to know the ending. Sometimes, you must suffer.

Well, here we are. Yet another self-pitying post. It's actually not so bad, and I'll be much, much better tomorrow, the situation has done nothing but improve over the last few days. I hope that you are doing good!
Publié par Claire à 08:52 3 commentaires:

Well, reader, looks like I lied. I said I'd be writing here much more often now that I am in Germany, but nothing as thrilling as going to a goth club happened to me in a little while now. Here's a 5 steps update on my status, however. Because I'm sure you're dying to know.

1. I have a terrible, terrible backache going on, and I wish it would just stop already, because I'm going slowly crazy. Also, I don't know if you noticed that, but as soon as you back hurts, you want to sneeze every 5 minutes. Which only makes matters worse. Why is that, reader? Why do I have back pains NOW that the allergy season is full on? It is not nice at all.

2. My roommate M went to Switzerland yesterday to pick up the last things that were still missing in the kitchen. This means that we now have a fridge, a stove, cupboards, knives and forks and even sharp knives that you can actually use to cut onions without crying your eyes out. Ever tried to cut up an onion with a butter knife? Don't. But our new kitchen? I like it very much. Kitchens rule. I love cooking. I'll come back in a few days, and say that I don't have any ideas left, but as of right now, I love cooking and I am the stove-queen. I don't know, I seem to have something with royalty these days... 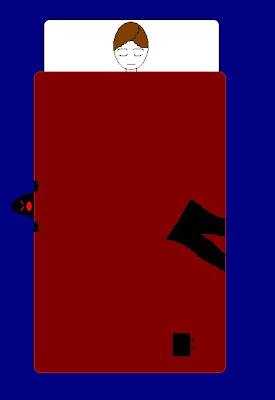 3. I have a truck-load of translations to do, which is great and will help a lot (money-wise) with my "find a dress for you brother's wedding" mission. I can't WAIT to go on THAT mission. A dress! A dress! I get to buy a dress! I love dresses! I'll try not to pick anything with tiny flowers on it. But you never know. Maybe I'll just go crazy and wear a Victorian gown and a gas-mask, like that girl I saw the other day at the gothic thingy. How about that? A Victorian gown and a gas mask... And then, once I have a dress, I'll actually go to my brother's wedding. HA HA! 5th of June! 5th of June! When will it finally be the 5th of June??

4. My room is in a terrible, terrible mess, even though I cleaned it yesterday. I don't know why this keeps happening to me, but I really, really hate it. OK today it does have a little bit to do with all the stuff my roommate brought back from Switzerland, but my "corner" of the room, with my bed in it and all, is in a terrible mess. I think some kind of evil spirit comes up in the night, while I am sleeping, kicks me in the back and messes up all my stuff. I'm pretty sure there is a Japanese ghost who does exactly that. And he's currently on vacation in Holzgerlingen. Stupid bugger.

5. I have been catching up on series the last few days. I now have seen all the latest episodes of Ashes to Ashes (not as good as it used to be, if you want my opinion), Glee (anything that sings hs got my vote) and Dr Who (I'm so glad Matt Smith is good. He really is good. He really is very very good). Series make me unreasonably happy. I still have some catching up to do on the Big Bang Theory and How I Met Your Mother, but I just can't keep up with the breaks and stuff.

Well, here we are, reader, 5 very important news-flashes about me. I hope you are doing good, and wish you sunshine.

http://www.youtube.com/watch?v=Wik2uc69WbU you can no longer live without this. Sing with us !
Publié par Claire à 08:57 7 commentaires:

Libellés : General, I am the Duchess of the Night, Language Learning... I guess..., Travels, TV series

Hi again, reader!
Now that I have moved to Germany, I figured I could try and start blogging a little bit more regularly. It will help with my English, hopefully, since I am speaking German so much lately. Of course, right now, I am back at my parents' place, sitting on the couch, but it won't last, I'm going back tomorrow. In any case: I will try to blog more often now that I am having adventures in a foreign country on a daily basis. First type of adventures I had last week: Spending time in gothic-dark-metal-rock-clubs in Germany.

Now if you know anything about me, (just read the previous post, for example), I am not a gothic-dark-metal-rock-club type of girl. I am a folky-pop kind of girl, and I like to drink herbal tea. I gather, also, that German gothic-dark-metal-rock-clubs are particularly... let's say... radical. I might be wrong, however, as I have no points of comparison whatever. Still, I spent some time in them last week, since it's the type of things my flat-mate M likes to do. It was really great fun, in a Discovery Channel sort of way... Here are 5 things I discovered :

1. You can be the Prince of Darkness and the King of Doom if you wish to. Just do it. It's OK, here. You are among friends. I find it pretty cool. Give me two weeks, and I'll be the Duchess of Night and the Marquise du Désespoir. It sounds so much more gothic in French, I figure... 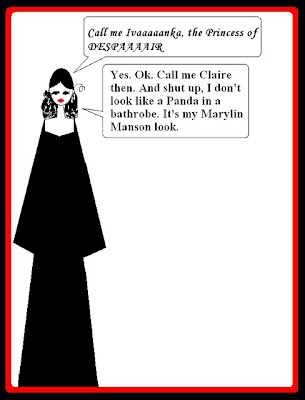 2. If you wish to be the Prince of Darkness and the King of Doom, however, watch the DJ closely. He might choose to play little pranks on you. Like for example wait until you and your valets are very, very drunk and then play "Walking on sunshine" or even, amazingly "Ca plane pour moi", a weird Belgian hit from the late 70's, by a guy named Plastic Bertrand. (It's in French, but it's still Belgian. :D YOU GUYS NEED TO TAKE YOUR RESPONSIBILITIES). The sheer name of the singer gives you an idea of what it sounds like. It was a very... 4th dimension sort of an experience. Or rather, Close encounters of the 3rd kind, maybe.

3. You will be more noticed wearing a T-shirt and jeans than, say, a tartan skirt, a linen shirt, a jingly little ankle-chain, and a dead racoon hanging from your back. I am not kidding you about the dead racoon part. However, apparently, wearing a washed out 92 Backstreet Boys Tour t-shirt is OK too. Did I ever tell you about Colin Farrell... Crap, no. That was Boyzone....

4. If you are the Prince of Darkness and the King of Despair, you also know how to dance to the music they play in clubs like the ones I was at. I can't. I can dance on Rihanna "Pon De Replay", and I'm not even so sure about that. But: My challenge for next time around: Play "Pon De Replay" in my head, and try and dance to that, while completely ignoring Rammstein in the background. I'm pretty sure it will be a huge win for the Claire Team. I'll keep you informed. ("let the bass from the speakers run through ya sneakers, move both ya feet and run to the beat" \o/ _o_ \o/)

5. Maybe, just maybe, I'm completely losing my marbles. It is a possibility I can't ignore. I'll keep you posted on this one too, I promise.

PS: Another mission for next time: Learn how to spell Marilyn Manson before saving my beautiful Paint illustration.
Publié par Claire à 04:49 6 commentaires:

Libellés : I am the Duchess of the Night, Language Learning... I guess..., Music, Travels
Articles plus récents Articles plus anciens Accueil
Inscription à : Articles (Atom)