Hullo reader ! Well, I haven't been writing here in forever, so I thought I'd drop by, and keep you updated on my status, because, as is famously known, my life is rivetting. So here are 5 random news from Cologne. 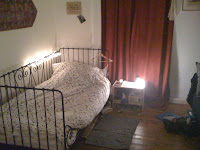 1. I still love it here. I love my room (which is actually furnished now, and very comfy too, thanks to the generosity of... we'll say Santa Claus, but you know who you are), my flatmates are still great, and if only I could manage to drag my butt out there, I'm pretty sure I'd even enjoy the city in itself. I've been a little short on time, in fact, these days, and haven't been to the city center this week. Maybe it would be a good idea to get some fresh air. And ice cold wind. And rain.
2. I went to a techno party with flatmate N the other day. I went mostly out of curiosity, but I really did love it. I think it's not really music. And I don't mean that in a grandmother "that's not music it's noise" kind of way, obviously. It's just, it doesn't talk to your ears so much as to your ribcage. It's music that you can actually (cheesy-alert) listen with your heart. I mean that literally. Because it vibrates. Follows that you can also listen to it with your lower intestine, but that's a really cheap joke. "Bässe massieren eure Seele" I guess is what I mean, but Peter Fox said it better than I can, though it's a little pompous for my purpose, I guess.
3. I'm going to Senegal next month, to work. I'm kind of scared. I don't know what to expect, there are going to be hundreds of us out there, and I don't generally like such huge gatherings, but I'm still very excited and can't wait to be there. It's probably going to be sunny as well, which really will be a nice change, the weather here is just plain depressing. I already got my shots and my passport, and my plane ticket and all, but I still feel like there's no way I'm going to Senegal in a week or so. Still, it's going to be very cool, and my friend J is going too, so I'm guaranteed to have a lot of fun.
4. I've been watching too many stupid videos on the internet lately. Especially Muppets video. Therefore, I've had stupid songs stuck in my head for days, like the Manah manah song, or the one that goes "I'm my own grandpa ! I'm my own grandpa ! It sounds silly I know, but it really is so, oh I'm my own grandpa". It has been a constant and conscious effort not to start yelling them out in the kitchen randomly. I'm holding on. I think it may burst out of me some time, and then, though I will still find my roommates great, they might change their mind and throw me out on the streets. Thanks for nothing, Jim Henson!
5. I've bought a salad today (rivetting, I told you). One of these pre-mixed, ready to eat things with mayonnaise in them. I thought it was perfectly innocent coleslaw, carrot-free and delicious. It actually containted PINEAPPLE. PINE-APPLE in COLESLAW. Germans are mad.
Well, that's it from here, I believe. I hope you're well. As for me, I'm going to go have a look in the kitchen, see if there's something reasonable I can scavenge.
Publié par Claire à 04:58 2 commentaires:

Libellés : General, Here on Earth, I am the Duchess of the Night, Lists, Music, Travels

Though it's cold inside... 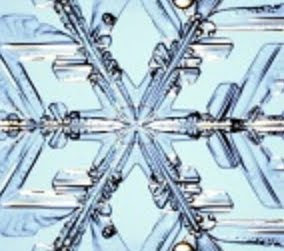 2011 is here! 2010 is over!
I wish you a happy new year, sweet things to eat, soft things to wear, warm things to sleep in, and nice people all around you. I wish you love, joy, health and glory, I wish you sunshine and fresh air, I wish you all the best, and then something even better.
Publié par Claire à 06:54 Aucun commentaire: