Hey reader! Here I am, waiting for the very last episode of "Alisa, follow your heart", (the German series I told you about a few posts ago). It is apparently to be followed by "Monika, don't trust your brain".

It's the 240th episode of the series (oh my, I can't believe I've watched so many). It has helped me a lot with my German (am I believable? OK, right, maybe it hasn't, but I can now say "Zum Risiken und Nebewirkungen, lesen Sie die Packungsbeilage und fragen Sie Ihren Artzt oder Apotheker" nearly as fast as the guy on TV, who says it after basically every add (it's the warning for over-the-counter medicine, for which there are very many adds in the afternoon on German channels. Suits the target. I have the same taste in clothes as English old ladies, and the same taste in TV shows as German grans.) 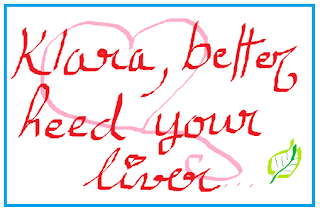 Oh my, here we are. Started already. They got married, last time, and the previous three episodes were spent mostly making out on various couches all over Germany, whispering "I love you", and "Never again shall we part", and "I'll never let you go" and "you're my life". Also, we had a little sneak preview of the following series, "Hannah something or other", which is actually a spin off. Very handy. In any case, since I also baked millionaire's shortbread yesterday, I'm not sure I can handle any more sugary sweetness. Here we go. Speeches. Cut the cake! Cut the crap :D
So. Well. What I really wanted to tell you is : today's top 5. Today's top 5 will be about the series that really matter(ed). Now, I'm not crazy, I know the difference between fiction and reality, and nothing is ever as important as what happens in real life. But some series, especially n°1, just matter more than others. They make you laugh and cry even once the credits have rolled, they make you feel like you know the characters, they change you ever-so-slightly, just like books can. Top 5 rules apply, and some of the items on the list matter much less than others. Number 1 and 2 matter more than 4 and 5. So it's not really a top 5. It's more of a list. Here goes, in any case (and I promise I'll try to be a little more focused from now on).
(Ah ! Watlz time ! Huhuhuhu I so wish I could put a video right here. You'd love it I'm sure. She looks like a swan, he looks like a penguin, their offspring have a 50/50 chance to fly... Ok right. I don't care. I love it and have been waiting for it for... 240x40 minutes. Feels like a lifetime.)
1. Buffy the Vampire Slayer. Best series ever, according to me. I'm not at all ashamed of admitting how much I love Buffy the Vampire Slayer. Series 1 to 7 kept me rivetted, me and my sister M were in front of the TV every saturday at 20.50 sharp (not sure she's as keen as me to admit stuff on the internet, but hell... XD), and I so wish it had not ended and I still miss it, and I still compare all the series I watch with it. Willow, Alex, Anja, and my favourites : Spike, Giles and Buffy herself... 7 years of coolness and great dialogues. And the best title music in the history of television. Also, something more I have in common with my best friend V. We both cried our eyes out during Acathla, and we still call Alyson Hannigan "Willow"...

2. Dr Who. Now, only three seasons had any impact on my mood (I did not like the fourth so much, and I have terrible fears concerning the 5th), but boy... They really hit hard. And there are so many episodes, and so many aspects of it that give me the shivers that I think The Doctor deserves his place on the top 5 completely, in spite of the ridiculous visual effects and the Oods, which are so ugly I wish they had blurred them altogether. Still, there is the "Blink" episode with the creatures that can move only when you don't look at them, the episode when the Doctor becomes human and David Tennant's last, which I watched at my sister's the other day. I think I'll stop right now, because I feel like all I ever talk about on this blog is the Doctor. Is this love, is this love, is this love that I'm feeling?
3. ER. I don't know exactly why, but I know that simply listening to the title music makes me cry. Cause it's over, now. And I'm a little emo. I was very disappointed by the last episode, but it's still a brilliant series, with great actors and great stories, and Neela. (My my. Alisa and her brand new husband are off to Canada in a horse drawn carriage. I'm a little stressed about the part where they cross the Atlantic, but whatever). Neela, and Abby, and Carter and Benton and Archie. Yeah, even Archie. And also Kovac, who kills me with his smile, even though I don't even like his character that much. And also that episode in Africa which was better quality than many movies, and that other episode with Ewan McGregor as a guest star.
4. Firefly. Another Joss Whedon series, and I'll never know if it mattered so much just because I felt maybe if I loved it enough it would not really be cancelled. It has great characters, brilliant dialogues and that's all I would ask for. But it also has a Star Wars vibe to it. And by that I mean a cool Han Solo vibe, not a lame Jar Jar Bings groove. Yeah. I said Jar Jar Bings groove. I'm very sorry.
5. Bones. This is one of the ones that don't really really matter, but I still want to mention it here. Because Booth is one of these character that you think you might actually fall for in real life. And because I like them all so much, Sweets and Bones and Hodgins and even Angela and her calling everyone "sweetie". I really wish they would show us the end of season 5... It was suspended, here in France.
So here. And of course, there are many, many other series that are really great (Lost, for a start, House MD, Glee (ahahaha !! That's a new one ! Drives me completely nuts, can't wait till april for season 2 !), Life on Mars, Ashes to Ashes...), the list is very, very long. What's your opinion on the subject? Any series' characters you might fall for in real life? Anyone thinks I have missed something huge?
Publié par Claire à 07:10 2 commentaires: