Never, ever before did I use the word "derelict" as often as I did today. In fact, I do believe that I had not, ever, used the word "derelict" before today. And it's funny, because "derelict" happens to be exactly how I feel right now... But it was a new contract, reader!! How about that! Brain-melt completed at 8 p.m. tonight, but at least, it was interesting and it was some work.
Anyway, now that I am coming back from Lille, on a train and bored with my eeeeeePC (I can never remember how many eeeeez there are. Even when it's written on the screen right in front of me...) I figured I might as well just get on with it and write a new top 5. Today, the top 5 things that PISS ME OFF in a completely irrational way (pardon my French), even though they are really not important things at all.
1. Slow and/or crappy ATM machines in French train stations that do not properly record every number you type in, and then they think that the PIN-code is wrong and they beep terribly loudly and say things like "NO! WRONG CODE! HA HA HA! LOOK! HERE'S YOUR TRAIN ENTERING THE STATION! YOU CAN FORGET ABOUT GETTING ON IT!" and then all the people behind you complain to the people next to them and sigh heavily because not only are you either a thief or a dimwit, but you are also wasting their time. (Do you love the word dimwit, reader? I know I do). Someday, I'll stay next to the stupid machines once I have my train ticket, and then wait patiently and make fun of the next person in line who gets into trouble for typing his or her PIN code too fast. Being annoyed doesn't necessarily make me charitable. 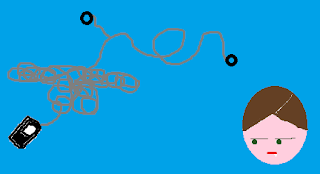 2. My cell phone when it runs out of batteries. I hate it when it cuts me off mid-sentence, especially when said sentence is "I'm sorry, I have to go, I'm afraid my battery is l..." and then I feel like I'm rude, even though it's hardly my fault. I think the stupid cell phone could hold on for 2 more seconds. Just 2 more. C'mon.

3. My headphones when they get all knotted up in my pocket and then I have to detangle the whole thing in the subway with everyone there having nothing metter to do than watch me. I have to say, though, this one is really just my fault. First of all, because I can never seem to manage to have my headphones last longer than 2 weeks. Second, because the only headphones that I have had for more than a year I have destroyed as much as I possibly could without actually damaging their ability to produce sound. I separated the two wires leading up to my ears, and now it doesn't just get twisted any more, it knits a bloody pullover in my pocket everytime I put it away. Also they are the weird kind with the wire for your left ear reaaaally long, and the one for your right ear really short, and then you have to go all the way around your head to put them on properly and it annoys me. It annoys me much.

4. People making noises in waiting rooms. I have never been able to understand how it happens that you can sit next to them for half an hour and not notice anything, but once you hear that they are chewing their gum loudly, or maybe breathing heavily, or fidgetting with their key-ring, then it drives you completey nuts. Happened to me twice tonight. And I was already derelict before. Imagine how I feel now!
5. Streets where house numbers have been granted by a madman who couldn't count. You arrive in the right street, you're looking for number 145, and then you notice that next to number 12 is number 324. Then there's number 98. And that's in Lille. But if you're in London, you must also distinguish between 345 Crescent Road and 345 Crescent Street. Makes me completely mad. Wakes up the Godzilla in me (which is never really far beyond the surface I must say).
Anyway. Here are some trifling things that annoy me beyond expression in my daily life. Because some times, it's nice to write these things down, it helps me remember that I don't have real problems, and I have enough time to worry about my headphones getting knotted up in my pockets. Tell me about you!! What's annoying to you?
Oh! And also, before I forget! I wanted to share with you this sentence by Anne Brontë, in the preface to "The Tenant of Wildfell Hall" (see how I don't write Tennant with a double N? I had to make a real effort!). Made me laugh to myself on the train this morning, and it was before 7 a.m. so it must have been real funny :
"...if I can gain the public ear at all, I would rather whisper a few wholesome truths therein than much soft nonsense".
I'd like to offer my sincerest apologies to Anne Brontë for getting all mixed up in her advice and doing exactly the opposite here. Now, next time, I'll try to find a fex wholesome truths for you, and you'd better be ready and polite, even though "He that [has the courage to dive for the truth at the bottom of the well --don't ask me, I'm just copying this from a book--] will be likely to incur more scorn and obloquy [yes, you hear me right, obloquy. And scorn.] for the mud and water into which he has ventured to plunge, than thanks for the jewel he produces."
Now, this may well be tasteless persiflage from my part, but the preface to the second edition to the Tenant of Wildfell Hall is sheer brilliancy, from beginning to end, obloquy included.
Next time : post n° 200!! Any good idea of something special I could write to celebrate?
Publié par Claire à 06:47 2 commentaires: 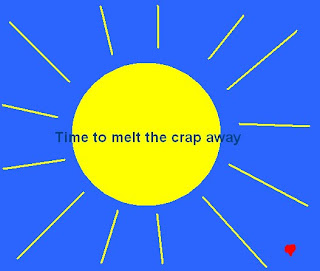 -My "official" computer, the apple of my eye and the essence of my days, has been fixed by my super-powered brother in law V. I can now type with reasonable intervals between the keys, which is really nice. Feels like luxury, after using me eeeePC for so long. Like for a week, that's how tough my life is... I'm very glad about this, and so here we are: an Internet tribute to V, whose week-end was spoilt by my merciless nagging.

-Have you ever listened to Mumford & Sons? I heard of it on Craig Ferguson, the other day (today, in fact), and when he said "English pop-folk band", and said their album was named after a Shakespeare sonnet, I knew I'd love it. I was right. I mean, what's not to love? English, Pop, and Folk. With a little Shakespeare thrown in. Do listen to their songs, they're really brilliant, I hope they're really, really successful, and I likes them much. They have banjos and they sing together and they're like the band that needed to be invented just for me. At the crossroads of Joe Purdy and Flogging Molly. (And a little bit of Damien Rice, as well, though that's not my favourite side of them, with all due respect to Damien Rice. There's only so much Damien-Riceness I can take, and Damien Rice himself should stay in charge of it).
Go on Deezer right now, reader, and tell me what you think. (I have discovered them today, I might have forgotten all about them tomorrow, but I don't think I will.)

-What I like best about modern society and the internet is THIS type of things. I don't know if it's me, but it makes me cry. This one does, and the Belgian one in a train station where everyone starts singing "The sound of Music" too. And then I feel better about life in general.

Here are my news for today. Three random facts. I have to say: This month of fFebruary has sucked. I hated it (apart from some cool stuff, like my sisters coming over, or going to the movies with my friends). I hope March will be better, and I'm sure it will, with the help of flash mobs and Mumford and Sons and sunshine and more good stuff. Blank slate: now, it's time for the spring.

Lots of love,
Me