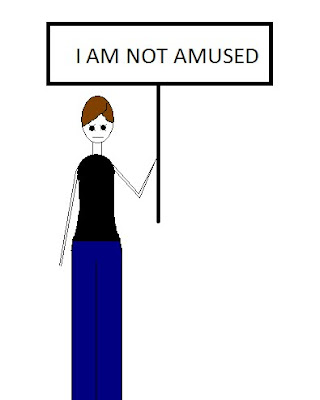 Reader, I can't take any more. I'm not like that, usually, I don't ever talk about politics, not here, at least, but well, this is the Internet, and on the Internet, any fool can express their opinion, whether sufficiently informed or not, so this here is mine. The opinion of an uninformed fool. Here are 5 things that, truly, really, profoundly and deeply annoy me about France these days.
1. I cannot deal with the blatant populist crap that's been vented by the people in power over the past few months. We are dealing with all kinds of troubles, these times, a terrible economic crisis, war in Lybia, it's not like it's a light news week, and yet, what do we talk about? We go on and on about state subsidies for the poor and how that's too much already. We start a 20th debate about Islam in France. As if that was going to make anything better. As if the problem with Islam and France was not that we talk about it as if it were a bloody problem.
2. Follows on 1.'s heels: Why can't they see that it doesn't work? Why can the moderate right-wing people not just wake up already: the number of their supporters are plummeting, the extreme-right party is getting more and more successful... Maybe it's time for a change in strategy, what do you think? Come on! Come on! I listen to them and they remind me of Fox News maniacs. I like my country better when it's lukewarm. The outdated racism we are dealing with these days makes me want to come home and fight. It makes ME! want to go home and fight. You might not really know me, reader, but I'm one of them half-hearted, don't really give a damn kind of people. What I'm saying is: It's bad.
3. That thing with the head of the IMF. I don't know if it's a terrible ploy against him as a person or if he just snapped, I don't really care, to be honest, it's a sad story either way. But in any case, that's one more interesting candidate for the French presidential election 2012 down, and it's depressing.
4. Follows from 1 and 2 as well: people are getting louder and louder and feel less and less guilty about voicing hateful, racist points of view. I've seen a piece on TV today, a typical xenophobic rant, things that I might have found... well in a way normal from an 80-year-old, because well, it takes time to know enough to not fear the people coming over to your country. From a bus driver. He might have been 40 something. Is that really what it's all coming to? Are we not a little bit cleverer?
5. The media, too. I'm not really blaming it on the reporters, they do their job and report, but maybe, maybe if we did not jump on every occasion to broadcast racist rants and backward remarks, we would have less of a problem with people broadcasting their own racist rants and backward remarks on the bus. But then I might be wrong about that, because, as they say, know your enemy.
Well, I sound just like the holier than thou pains-in-the-butt that I would like not to become, but it just had to come out. I just had to say it. This is NOT GOOD, and I really, really wish it would stop. Self-righteous rage is not a good look for me.
Publié par Claire à 12:48 2 commentaires: