Ok, granted, it's not too original. But hell. That's a good song. In fact I was on the verge of a terrible panick attack tonight, and then I went and saw a Craig Ferguson video on YouTube (I've been doing that a lot when I was on the verge of a giant panick attack, which has happened often this week. I love it. And then I make stupid private jokes with myself all the time...) Anyway.

I was looking at Craig Ferguson videos on YouTube (because I don't have CBS here at my flat) and then I saw that video of Michael Franti & Spearhead, and suddenly I felt much better. I do hope it will have the same effect on you. Especially if your back is stuck. But I'm just saying.
Spread love, reader ! Weee heeeheehee...
PS: Here's the non-live version if you like those better. I know I often do. 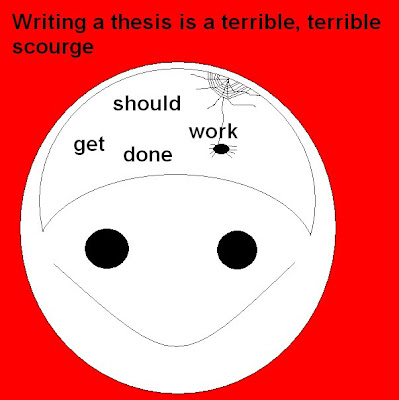 Hi reader!!
I have a question to put to you. What do you do, when you learn that the thesis you have to wirte, due in 7 days, must be 100 pages instead of 40?
You get to work, stop sleeping, replace meals by Red Bull and coffee and consider brewing your own vodka with old potatoes in a plastic bottle under your mattress?
Ooooor, maybe... you pretend nothing happened, work little by little, hide the panick under a thick layer of sugar and go to the movies? That's what I did. I liked it.
I went to see Star Trek, since I am planning to become a geek in order to understand all the jokes and references in The Big Bang Theory. I liked it. I like all these recent movies that are very first degree and could have been shot 30 years ago. Star Trek perfectly qualifies, and it was really great. Only it's still shows that it's a modern movie, since the special effects are very, very pretty and I think the costumes have been slightly updated.
There were some things that I did not like though. For example, the guy cast as Jim Kirk. You can only be so ridiculously caricatural and not lose me (Not true at all. I am very, very hard to lose. But that guy? With the blue eyes and the squint?) And the music too. The music was a little weird. Though I loved the title music which was basically just TAM TAM TAM TATAM. Got me in the mood for the rest of the movie.
Anyway, I thought it was really nice, and I secretly believe it dealt with nuclear weapons and why they are not good for you. I like making up my own secret meanings for movies as much as I hate reading those of other people. I have a great secret meaning for Joss Whedon's new series Dollhouse. Probably completely obvious secret meaning. Interested in knowing?
If you hate reading the secret meanings other people discover in movies (like ""Singing in the Rain" is a metaphore for McCain's campaign and why it failed" or whatever weird stuff you sometimes read on the Internet) then do not proceed with the reading. (Is that English, or do I just sound like a douche?)
Well, the Dollhouse is a series where people are emptied of their own personalities and kept in a super-secret underground base. They are then imprinted with a new personality and sent on missions. I thought at first it was about whether you are a body or a soul and, if you are a soul then where is it exactly, in your body, or in your memories and stuff. But I think, in the end, what I get from it is more a story about what we do with ourselves.
It's like we were all our own little Dollhouses. We go on missions and we want to have new personnalities in order to be able to face the challenges, so we make room for the new character to step in. Only sometimes it's a little complicated not to forget who we were in the first place, and if you do a bit, which is a compulsory part of growing up, then when one of your "mission" personnality is outdated or falls, like a mask, maybe because you are a little tired or because there's no one here at the moment to remind you of what you are exactly, then you feel like you're empty and meaningless, like the empty Dolls of the series.
I'm not saying we all are empty deep inside or anything that pessimistic and depressing, just that you may feel this way once in a while because you realise that you can't remember who you are exactly. I feel that it's because I am not exactly the same person depending on the context and on who I'm with. In real life, though, I like the fact that you make your own imprints. People around you may change the mission. But you make your own imprints. I like it.
Anyway. This is starting to sound half-Gollum, half-Dr Phil, so I guess I am just going to go to bed now. Yes. That will be nice... HIT THE PILLOW !!
Live long and prosper ! (I bet you did not expect that one...)

Explosions in the sky

Hey reader !
I bet you don't know the song, because it's not very famous at all, but it is still a song, and most appropriate for tonight's post. As you probably know, Brussels, Belgium, is the capital city of Europe (Kind of. I believe it's Strasbourg, people in Luxemburg believe it's Luxemburg (har har) and I guess people in Germany believe it's Berlin, because of the symbol and all.) But Brussels, I think, is the real capital city of Europe. It's the most European place I've ever been to, whatever that may mean.
So tonight, they had a great European celebration (the Festival of Europe, it's called) and there were fireworks tonight, which I saw from my window. And here's tonight top 5, therefore, the "Top 5 random things that went through my mind while watching the Festival of Europe's fireworks" (that's one top five I bet you did not expect. I thought about doing the "Top 5 actresses I'd most like to look like", but then I changed my mind. Maybe later) 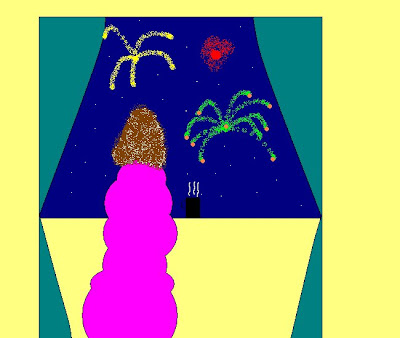 Anyway.
1) I don't know why I hated firworks so much as a kid (apart from their being noisy and loud and terrifying, and the fact that I'm afraid of big crowds, especially the ones that drink stale beer from plastic cups on the 14th of July (and I do mean 14th, it's not a typo, I'm French, goooo team baguettes, I heart frog legs and snails, give me my beret, I need to go on strike and march down the streets singing the Marseillaise)

2) If I hear someone tomorrow saying "I wish they would not use up all our taxpayer's money to blast stupid gunpowder in the sky for 15 minutes, we're in a recession and all going to die, they should save it to subsidise baby seals' feeds", I might get a tiny little bit agressive. I'm glad we can do something pretty and light and poetic with the taxpayer's money for a change. Without that, it would all just be business, and I do hope Europe's more than that.
3) I'm very glad I chose to become an interpreter. It's because of Europe and all, international community and stuff. I'm glad I chose to become an interpreter. I do hope I'll manage to get my diploma. WRITE THE DAMN THESIS, CLAIRE ! (I read my own blog, so why should I not leave a little message to myself, huh?)
4) At some time during the fireworks, however, I decided that I did not have a good enough view from my window, so I joined my roommates who were watching it from the roof. The next thing that went through my mind, as I was climbing the fire-escape ladder barefoot, was how important it is, in life, to have the appropriate shoes. One should always take time to consider footwear before coming out of their room (especially in their pyjamas at midnight in Belgium). Might help one not freeze to death and enjoy the fireworks without one's feet turning blue. Also they looked like they had been barbecued, since the floor up there was an iron grid. Things are better now. I added a hot water bottle to the comforter I was wrapped up in before, and things are going great.
5) Even if you don't feel like you belong and you don't know what to tell them and they look a little puzzled everytime you open your mouth, it's nice to have roommates.
So there you are, reader, tonight's Festival of Europe fireworks. Hope you had a nice saturday and will have a nice sunday too. Any random thoughts you'd like to share with me?
Publié par Claire à 14:57 6 commentaires: