Well hello reader ! It's been quite a long time since I last wrote, but I've been very busy (for real, what a nice change...) Indeed, it's exam time again, and I took the first of a long and dreadfuls series of oral exams on monday (I started with German, which is a good thing, insofar as it's... well... not my main strength, let's put it that way so I'm just glad I'm done with it. Till September anyway... -_-'')

The other exams were not that bad, but it's not finished until the Big and Evil Jury of Death which is on Tuesday. I don't know yet if I really am going to go. I consider a lot of alternative careers, nearly all of which involve the words "vodka", "country singer", "under a bridge" or all three... Anyway. Since I am going to leave Brussels soon, whatever the outcome of the exams, I wanted to tell you about another Belgian top 5 : The top 5 things I'll remember about the Place du Luxembourg.

1) The European MP's walking around in their nice charcoal suits and shiny shoes. They are all very serious and elegant, and they always have their name tag hanging around their necks, which oddly reminds me of the "Unaccompanied Minor" things that they make you wear when you are taking the plane alone. Like "If lost, please return to seat 234, European Parliament, Brussels"...
And also I love how they all have backpacks with teeeeeny tiny straps and then their backpack is stuck just under their heads and their suits are all crumpled up. It looks a bit like their backpack is holding their arms up. I whish I worked at the European Parliament, then I'd get to see them wriggle and writhe to try and extract their arms from said straps. But don't mind me and my evil mockery, I'm just jealous is all. One day I'll work at the EP too, and I'll be wearing the shortest backpack straps of them all... Just wait and see.

2) The Liege Football team winning the Belgian football cup. I was "working" on my Big and Evil Paper from Hell, and then I heard quite a lot of noise downstairs, so I decided I'd go and have a look (I had been working for 5 minutes straight, and thought I deserved a break.) Never seen that many people peeing on such a small surface at once before. Amazing. All the supporters in a line, peeing on the wall of the sport's bar. I wish I'd had my camera...

3) The homeless guy who asks for money downstairs. He always says he accepts checks and credit cards, and he cracks me up. He looks a little like crocodile dundee, and once told me I had saved his dog, because he would have had to eat it if I had not been there to help him out with his lunch money. I then said "well, it would have been nice with a little ketchup and stuff" and he looked at me like I was weird. Anyway. 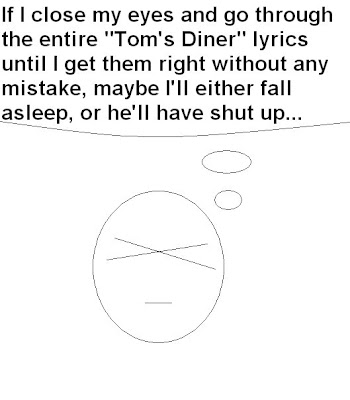 5) The Delhaize downstairs where I spend 85% of my money buying a lot of very unhealthy stuff. Especially now that it's exam time. I pretty much feed on sugar and fat now. I am always afraid that the students who work at the Delhaize downstairs think I am some sort of alien creature who eats only broccoli and mars bars. I do have the complexion of a broccoli eating alien right now, so I don't blame them, I just hope they won't call the FBI or anything. But then again, I might get a Dana Scully autograph for my brother...

Anyway. I'm going to get back to work now (trying to find some interesting speech in German...) I hope you aree doing fine. Oh, and if you've got a little time, go see Craig Ferguson singing on Malinky's blog. She's got the greatest YouTube channel ever, and uploads Craig Ferguson's show every night. I'll be forever thankful, Malinky!

You worked for 5 minutes strait and you were ready for a break, huh? I hope that wasn’t a record. Hey, I know what you mean.

As for the guy asking for money, that man knows damn well he was not going to eat that damn dog! You shook him up with the ketchup comment.

To improve you english, have you thought about listening to public radio? Here is my school's public radio station: http://wuwf.org/