It's Sunday. No big and interesting adventure ever happened on a Sunday. I hate Sundays. I don't really, cause they also mean sleeping till 11 a.m., only since I don't really have a job these days, I can pretty much sleep all I want any day of the week, which robbed sundays of their sole purpose. And outside of family reunions, I really do hate sundays, because there is nothing interesting to do on a sunday, and I don't know why, but they seem to be rainy all the time. So today's top 5, in honour of Crap-Sunday-Weather, will be the top 5 things I sould remember not to do when I am down on a sunday, together with possible solutions. I do not actually believe there is a cure to sunday crap-ness, but you never know. There we go. I should not :
1. Listen to the music I want to list 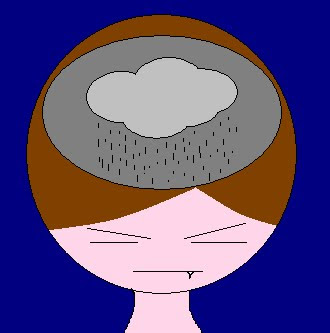 en to. What I should do is choose whatever track I feel like listening, and then pick its exact opposite. I should avoid, in particular, listening to sad tunes (it only ever makes things worse. Patty Griffin nearly killed me today. By the way, about Patty Griffin... Is it cool to listen to Patty Griffin ? I like it, but I also have to be pointed out what's cool, so I'd really like to have your opinion... Long Ride Home is such a nice song...)
Also, listening to rock music that you believe will make you more... say tonic and... wake you up is not a good solution. I tried the Babyshambles (whom I really, really love), and all it did was adding a wish to kick the furniture and punch innocent walls to a feeling of down-ness. Whatever you call it. It's no good.
Because then either you stay aggressive till it's time to go to bed, or you do punch a wall, and then you hurt your hand, and then you feel so stupid you want to punch yourself. I would say... stupid hip hop stuff. Or maybe also "Superman (It's not Easy)" by Five for Fighting. But that might just be me. Cause it's a sad song, but it makes me feel happy, somehow. Scouting for Girl also does the trick (especially "James Bond", which is really cool).
2. Go back to bed and do nothing. Then I feel bad because I haven't done anything worthwhile with my day and it adds guilt to the lot. Baaad idea.
3. Start making a complicated recipe that I always wanted to try. Are you crazy, Reader? On a gray sunday under the sign of Craponus, roman God of failures? Usually, I find out that I am missing a key ingredient AFTER I melted half a pound of butter. Then what do you do with half a bloody pound of melted butter? Drink it? So no complicated recipe.
Then again, you might never have thought of baking a cake just because you're down, but that's what comes up first when I think about things I could do when I am bored. It's also valid for any creative work. Start with what you do have, and then figure out what you could do with it should be the general guideline.
4. Procrastinate. Cause it's sunday and you're supposed to rest and you're entitled to do nothing. No good at all. The logical thing is to start on the most boring task you can think of. Like... I dunno... cleaning the windows. Because, look at it this way : you are already bored to death doing nothing, so why not go on being bored to death, but at least figure you've done something worthwhile at the end of the day? (There, even I would argue that cleaning windows is really not worthwhile at all as long as you can see through them. But I'm sure you see what I mean).
5. Go. On. Facebook. Going on Facebook when you are bored will only EVER make things worse. I don't know why I like Facebook so much. I think I like the Facebook pages of other people so much that I pretend I like it myself in order to absorb some of their coolness... Doesn't work. Three hours spent on FarmVille are a good equivalent to drinking half a pound of melted butter.
Now, reader, time for me to follow my own advice and go 'glossarize'. I promise I'll write something a little more... interesting and cool next time. When the sunday afternoon jinx is gone again. Have a nice week-end!! Hu hu hu... that sounds kind of cynical now, doesn't it? Well go ahead, then! Clean the windows!!
Publié par Claire à 05:08

I found this site using [url=http://google.com]google.com[/url] And i want to thank you for your work. You have done really very good site. Great work, great site! Thank you!

ha, I am going to experiment my thought, your post bring me some good ideas, it's really amazing, thanks.