Well, reader, it's me again. Why, you ask ? Because, I've... got... chills, they're multyplyin', and I'm looooooooosing controwowol... No. Sorry.
Actually, it's because I've got... some serious work to do, so it's started an irresistible impulse to come over here and blog. It's pavlovian. In any case, I came over here to tell you about the top 5 things I found out hanging around in temperatures below zero over the last two months. Started in Copenhaguen, went on in Colmar, continued in Berlin, and kept on freezing in Rovaniemi, Finland (which was not so bad, even though it's in the polar circle). Did I tell you I love my job? I do. I'm not being ironic.
1. There are not many things prettier than a tree covered in snow. Not many things prettier than a quiet city street covered in snow. Not many things calmer than the sound of snow falling on snow. Not many things that look more comfy than a newly snowed layer of snow, all puffy and soft under your feet. 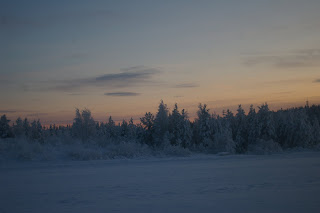 2. Even if you are feeling at peace with nature and romantic and ice-princess-like, it's best to resist the impulse of touching the snow, for several reasons : it turns into muck, it's wet, it's cold and it makes you trun lobster red. Also, even though everyone knows that suitable snow-shoes are for cold-footed sissies, it's best not to go out with stupid city-chick boots. Keeping your balance hurts your hips and makes you really tired, really fast. As well as look very stupid. Especially when surrounded with tough Samis who are very, very far from being cold-footed sissies.
3. Even if you are feeling at peace with nature and romantic and ice-princess like, it's best to remember that you have chapped lips, a red nose and that your hair is a mess : in a word, you look more like Rudolf the Reindeer than like the ice-princess. This, to avoid a dreadful shock the next time you encounter a mirror.
4. Forgetting your scarf in Brussels when going to the arctic circle is very, very stupid. Still, I bought a cool new scarf, soft as a feather and warm as... a scarf, which is nice. I now have two of those...
5. Danish socks and my DocMartens are all I need to be happy in the Arctic. And a crash course in deer-hunting, I guess.
Publié par Claire à 06:45