Hey reader!! Well, as I promised, I went and saw "My Blueberry Nights" yesterday evening with my friends V, A and A so I figured I'd tell you about it!
I was kind of tired when I went (I had some kind of trouble taking my train the other day, fell off, hurt my ankle, got barked at by a homeless guy's dog who did not like my lying on the ground, and then I fainted, and made a complete show of myself (I'm very good at that, really). Now my knee is bright blue, with nice litte red and green streaks, which is very disco-pop)... anyway... I mention it just because if you go see it, you might find it completely corny, but I liked it, so I'm making excuses... 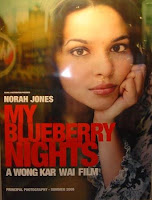 Well, first of all, the casting is brilliant of course. All of them were great actors, no one annoying like SJ (I'm not writing her full name on my blog, I can tell you!!). Of course, you could see the end coming, it was very very predictable, but then again, you could also see Jude Law, which is always a good thing. There's something about that guy... I don't actually like him, I think he's a little annoying in interviews, and I don't always like the movies he plays in, but there's something really attractive in his looks, I can't put my finger on it (too bad ^_^)... It's not just that he's handsome, I don't know, it's something else... I think he's got the exclusivity...
If compared to the only other Wong Kar Wai movie I've ever seen (In The Mood For Love), I'd say it was less original, and probably less worthy of everyone's attention, but still, it was really cute, and all the characters were really sweet, you wished you could be their friends too. And as for the "blu 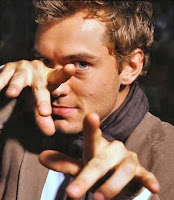 eberry pie complex", okay, okay, it's not very original, but still... It made me feel better, hearing Jude Law put things this way. (Now that I've said the movie was "cute" and "sweet", from a girl who loves musicals and just wrote a post about Enchanted, I bet you think you won't be able to sit through it, but really, go, go ahead, it's really good. Won't sprain a neurone, might not change your world, but if you're looking for a really nice evening at the movies, that's the one to go for. Gets you In The Mood For Love, though, which can get a little depressing.
Anyway. I guess I'll move on now, go study for my Law exam (ugh, Lord, I haven't even PRINTED the stuff yet!! How in the world am I ever going to be able to read it through and learn it by next week? I think it's hopeless. I think I'd better go straight ahead and watch the BRAND NEW SHAHRUKH KHAN movie which is nicely waiting for me in the living room... I'll tell you about it as soon as I've seen it!!)
Good evening Reader!! A bientôt!!
Publié par Claire à 09:15