Oui, reader, today is the day to get patriotic again. Cause I'm French. You know what they say about the French. They are rude, and they smell like garlic. But mostly, they are very proud. I don't think I'm too rude, and I sure hope I don't smell like garlic, but I am a little proud, I must say. Opportunistic would be more like it. And today, Reader, Marion Cotillard, (she's French) won the Oscar for Best Actress.
Hell, I don't e 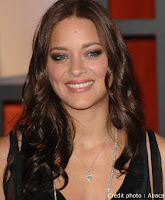 ven think I've ever seen a movie whith Marion Cotillard in it (well, yeah, I have seen Taxi...), but hey, she's French! So I'm very proud. Besides, she was so happy, I just wanted to say I was happy for her too. So thank you Marion Cotillard, for giving me a reason to show off (ha ha, I'd use any reason to show off, it's like a profession...), for making me happy, and for making the cutest acceptance speech ever.
Other than that, I must say I don't have much to say, maybe because I've been on holidays this past week, and I haven't done much, apart from working and working and sleeping and hanging around at home. Not much to blog about.
But I also have a thank you note to pass to radio presenters... I just wanted to thank them, especially local ones, because they are always so nice. Not the ones who speak all the time and mostly make stupid jokes, but the one who just present songs. Because mostly, they only ever say nice things and wish us well, and tell us to be careful on the road, they never ever complain, and no one ever sees their face. They are the closest you come to angels, in the media. Apart from health journalists in Belgium of course, but they are a special breed ;)
Anyway. I'm going to go now, and eat something, because I'm really really hungry. So have a nice evening, reader, and a good week, too, while I'm at it. And be careful on the road!!
Publié par Claire à 10:44