You're so cute, when you're slurring your speech...

How weird I can be sometimes... I've been studying in Brussels for months, and neveer even told you about either the city or the courses I take. Now as far as the city's concerned, I do have excuses, insofar as I don't see much of it, since I live right next door to the university. I don't even have to wear a coat in the morning, I just jump out of bed, and straight to my interpreting booth. I must say it's a nice change from having to wake up 2 hours before classes start, walk to the station, wait for the train, then take the tramway to the university. But still, as a consequence of that, I don't see much of what's happening in the city outside my little neighbourhood (as well as that of my sister M, where I spend quite a lot of time as well...)

As for the courses I take, there is no excuse for not telling you about them (except maybe for the probable fact that you're not even interested, but to hell with modesty, my life is absolutely thrilling, you're going to read about the time I spend locked in my booth in Brussels wether you like it or not. Read on, faithful reader, I can see you through the screen. And stop scratching. Wash. -Private joke for my fellow Alsacians...) 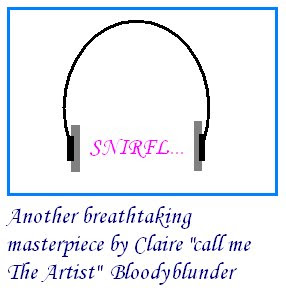 Sooo, what can I say. Booths are nice. Booths -boothes ? offer privacy and shelter. They make you feel like you're all alone, and like you're the unseen being who sees it all. However, even though it is sometimes very tempting, you must never forget that though unseen, you are definitely heard, and that can cause inconvenience...

-You can't comment on what you see. And for someone who is as fond as I am of giving her opinion aaaaaall the time, more particularly when no one gives a damn, it is extremely annoying. You can't even let a "yeah right" slip when someone says something you find daft, because in a real life situation, it couls start a land war in Asia. And if there is something I learnt from The Princess Bride, it is that you should NEVER get involved in a land war in Asia.

-People actually hear you when you try all articles in front of a word in German. You can't go "Ich gehe in der die das den dem Küche" like you do in your head when you're writing a paper. People hear you think. Mostly your teacher hears you, and though he might be kind-hearted enough to acknowledge the fact that for a change, you did not just pick one by chance and pray for the best --I never do that, by the way, reader, believe me--, he still will laugh at you, and who could blame him.

-I have come to ask myself radical questions about my career path last friday when I was struck by a terrible pollen attack just before going to class. That or the bloody raw carrots in the durum I had for lunch. It was terrible anyway, my nose was running, my eyes were swollen and my voice was going. Glam effect² in the headset of my teacher. But I would hate to gross you out.

Anyway. I'm sure I answered some of the key questions you were asking yourself about studying interpretation. You're welcome. Have a nice night, I'm afraid it's more than time for me to go get some sleep too... Tomorrow's simultaneous into German (he heehehehe, I love saying that...), and I have shivers running down my spine already...
Publié par Claire à 13:37