If there's a rocket tie me to it

Is that not a brilliant song title, reader ?

Well, well, reader, it's late again, and I can't sleep again, and I don't know why ! No green tea today, nothing that could possibly explain why I'm more awake now than I was this morning during my German class. I reached a new German-class low today, and got my teacher to say that I annoyed him. I would try and be a smart-ass and say that's what I was going for, but I must admit, it would not be true.

I was drenched in cold sweat and praying to make it out of the room alive, and then I forgot all about declination and grammar. And the teacher actually said "it is really getting on my nerves." In so many words (only in German). I do believe I had managed to convince some teachers that I was a hopeless case (with the cunning use of swedish verbs and a completely radom declination system) ... I remember one in Graz, who had told me my grammar was as bad as my vocabulary, and that she really did not see what she could do for me... But never had I in fact managed to make them personnally feel annoyed. (Hey ! My very first auto-link to the single most self-pitying post in the history of this blog !)

But honestly, though, it did not bring me down too terribly, since I really felt that I had done a good job in the simultaneous translation that we had done moments before, and since I knew I had done a very bad job while he was listening to me.

Somehow, when I feel I've done a good job, I'm never the one that we listen to, and today, as I was even considering offering my candidacy for the correction, we realised that the booths had a problem and our speech had not been recorded... 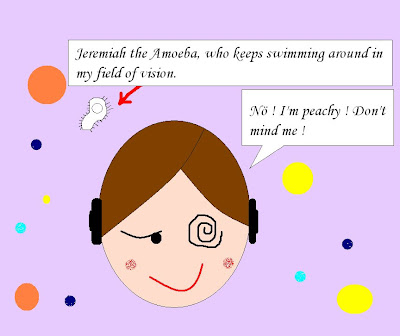 It's funny, because yesterday I was all alone in class, since my two classmates had an internship, and once again, I had no chance of escaping the scrutinous ear of my teachers... that's when my stupid brain decided it was time to launch into one of those great ocular migraine crap sessions, where you can't focus and see bright flowers all around and get tingles in your cheeks. Let me tell you I had a great time convincing them I was not on cocaine. ("No, it's like a migraine, only it doesn't hurt, and it makes me see things... and sometimes I get all.. allif... afuse... acon... a little ! confused ! With ! Wordjjjz !")

Anyway. Apart from that, there is not much to say of my life in Brussels, it's been dreadfully dull lately, and I've been spending a lot of time watching movies. I have watched one today, in fact, called Dor, it's an indian movie, and it's brilliant, but the subtitles are only available in English.

So I figured, Claire, my dear (yeah, I call myself my dear, especially when I have annoyed my German teacher, and when I'm out of chocolate), why don't you translate them yourself, so that your French-speaking friends can watch it too... So I downloaded a sub-titling (sub-titleing?) programme. Then I spent about three quarters of an hour trying to work on the first three minutes of an episode of Dr Who (I was just training. Don't sigh. I'm not watching the whole series all over again a third time. At least not this month ^^).

Of course, I did not get very very far, but you never know, maybe tomorrow !

PS: Here's to my sister M who also had a headache today. Hope you're feeling better !!
Publié par Claire à 17:40