I still haven't found what I'm looking for...

Beuh, reader, I'm in a very very bad mood.
I read Tina's post about language learning this morning, and realized there was something seriously wrong with my German. I don't have a pattern. I don't have a plan. I thought, with German, it would go just as it went with English, I would read books, speak with people, try never to be shy, watch movies, and try to speak german to myself, think in German, and then, little by little, I would start being able to have interesting conversations, and write interesting stuff, and have good results. Obviously, it's a failure.
My French to German translation teacher handed our works in this morning, and I got a "nicht Genügend". OK, I guess I could live with that, no big deal. But I read the text over and over again, I thought very hard, tried to have a little bit of style, even though it was in German, tried not to translate stuff literally, I really tried to be a good translator. I thought I had actually made it! But no! Nicht Genügend! 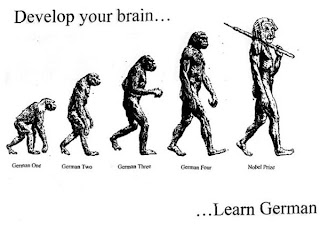 I've been in Graz for what... about three months now, and still: Nicht bloody Genügend!! I'm so angry at myself!! I really do think that my German is getting better day by day, but obviouly it's not true!!! It's just so disappointing!! I mean, she told me "if your grammar was bad, I would try to give you a good mark because of your syntax and your style. If that was bad, I'd try to give you a good mark because of your grammar. But both your grammar and your style are hopeless, so what can I do?"... Imagine my face, reader!! I was not alone, which was good, she said that to all of us poor French Erasmus students taking this course, but still...

It would be pretty easy to blame it on the teacher I guess, saying she's mean, and stuff, but she isn't, she is only telling me the dreadful truth: My German sucks, after 3 months abroad and about 10 years of dreary studies.


There we go. I thought I'd open up to my beloved reader, because I'm feeling bad, and also write that down, so that I can't pretend it did not happen tomorrow. Anybody have an idea concerning what I can do? Appart from giving up on being a translator and just start casting for American Idol?


Well, reader, I guess I'll just leave it at that for today, and go fetch something very sweet to eat. And then I'll keep on learning my vocabulary for tonight's test, instead of feeling sorry for myself!
Publié par Claire à 05:57

Well Claire my dear, there's something I need to tell you: Your German is pretty good!
And don't say no, we did some German chatting today ;)

I wouldn't give you a Nicht Genügend!

Danke Birgit!! I hope my teacher will listen to you when she's making me do my mündliche Prüfung next week... *fear*... :)

Thanks for commenting!! Thanks for being so nice to me!! :)