I'm in a terrible mood tonight. Blue and angry and annoyed and mean at everyone I see, for some reason I don't clearly understand. I also know the solutions to this problem (singing very loudly, watching Bones with my mother, reading more Shakespeare and dancing to the Sugababes while brushing my teeth) are not immediately accessible, which only makes matters worse.

Somehow, I believe that reading more Shakespeare and listening to "About you now" would achieve about the same result. Is that not really, really weird? I think it is. Maybe I'm just dehydrated.
In any case, since I am in a mean mood, I figured this top 5 would be a good idea for today, might even improve the situation. I've been wanting to write it for a while. Indeed, I did it again, reader. I went to that gothik-metal-dark-anything-as-long-as-there's-a-K-in-it club with my roommate on a pretty much weekly basis.

And I looked at people a lot, for three main reasons: 1. they are fascinating, 2. my "pretend what you hear is Rihanna and not Rammstein"-plan did not work out at all, and 3. my German, though it is improving a lot (I think), still does not suffice for me to understand what (mostly drunk) people say to me when very loud music is playing in the background.

Have you ever noticed, reader, how getting better at something is exactly like growing up? You don't really notice it yourself when you do. Except when you need to reach that box on the top shelf, and suddenly you actually can. Well it's the same with my German. But still, it's not enough for me to pass as a person of average intelligence when loud music is playing in the background.

The few people I have managed to talk with were really, really nice, though, and they really did try their best and did not give up on me even though they had to repeat everything 5 times. Special thanks to my roommate there, for introducing me to all his cool friends and not being ashamed of me, even though I must seem quite lame. Still, as I have very little skill in the area of deaf-mute small-talk in German sign language, I mostly tend to smile daftly, and then take off and go have a soda in a dark corner.

No dearth of those. Mostly I spend the night grinning like a crazy person, sitting in my dark corner, and I am not at all respecting the law in there that says you need to look blasé and sad. I can't help it. And I'm not mocking them, either, it's a kind of nervous fascination thing.

Sometimes, however, I do mock. And this is what I want to tell you about tonight. Tonight, the top 5 things that make me happy even though they really should not. The top 5 Schadenfreude. Cause I'm in Germany at the moment. Not all of them relate to Gothic punk rock dark metal clubs, though, but this is still where my inspiration came from. 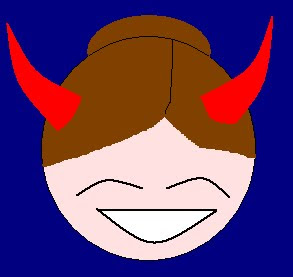 1. Women who have very high heels and cannot walk in them. I cannot walk in heels either. I love high-heels shoes, and were I not freakishly tall, I would probably wear some every day. Except for the fact that I would then have to stay seated at all times. But somehow, the sight of a girl going down the stairs veeeery slowly and a little unsteadily in heavy boots with 5 inches heels makes me unreasonably happy. When I am wearing sneakers, that is. Because I am cruel. When I am the girl walking down the stairs, needless to say, I do not find it as amusing.

2. My roommate who forgets to take his laundry out of the washing machine. Do not ask me why, but it makes me happy. Then it stinks, and he has to wash it again *delighted laughter*. I nearly hoped he would forget it in the washing machine again the next day. He's really nice and all, my roommate, I have no reason whatever to wish either him or his T-shirts ill luck. I have no plausible explanation for this particular guilty, happy feeling.

3. Metal fans who are not happy with the rock remix of Katie Perry's Hot and cold being played at their favourite club when they were expecting something by some band named something like "Stabbed Puppies Kry Acid Tears of Fire". Whadayamean "cliché"? Honestly, I am only slightly exagerating, and this is exactly why I find it all so awesome. Because sometimes it's fun to just go for it. Especially when it means I get to wear a long black skirt and really dark smokey-eyes make up. Still, I rejoiced over the depressed look of that guy on the dance floor yesterday. The brief struggle before he decided that his pride could not take head-banging to the beat of a pop song, remixed or no. Then he mimicked his head exploding, Mars Attacks style. Hu hu hu...

4. This creature. If you really, really mess up in this life, you'll be that thing in the next. The fact that it is so very ugly makes me unreasonably happy. But then again, it probably is a reasonably happy creature, and it digs galleries, who am I to judge. Unlike the little bugs that I saw the other day at the pet-shop with my roommate. They were all white, so we asked the seller what was wrong with them, and he said "we powdered them up with vitamin powder, because the (whatever bigger bug he was feeding at the moment) need vitamins". "DIE WERDEN EINGEPUDERT"! OoÔ

5. People who lose soccer matches. Only when they are not French, though. I know. I'm getting used to disappointment. I've been going to "public viewings" of soccer matches lately, twice, in fact, I've seen both Germany's games, and I don't really know why, but the "aaaargh" and "booooooh" (and occasional "arschloch", ok, I have to report this, because it's the truth) make me grin. I've not had my own "arsch" kicked yet, but I supposed it won't be long now. Only they are already happily making fun of me in return, so in fact I guess I'm safe.