My brother got married last week.

It was an eventful day, what with the groom cutting his finger and actually severing a nerve hours before the ceremony, but it was his index and not his ring finger, so everything went fine. He was sent back from the hospital and allowed to enjoy the evening. Probably less so the surgery the next day, but hell... We all learnt a little lesson (do not use scissors on your wedding day) and he was there at his own wedding, which is already a reason to rejoice :)

It has been a crazy time for my brother and his wife, since they have been simultaneously looking for a job, moving from the other side of the Atlantic, and preparing the wedding. And not once did I hear them say they were stressed out about it. Makes me dumb with wonderment. I do hope, however, that last saturday marked the beginning of a new, calm period of utter boredom. OK, right, no. I do hope that last saturday marked the beginning of a really great time in Paris where they will have plenty of professionnal and personnal success. Maybe just a few weeks of boredom would be good, however. Just a tiny little bit of sleep.

Here they are, reader! I will not show their faces, because you need sunglasses to look at them safely. 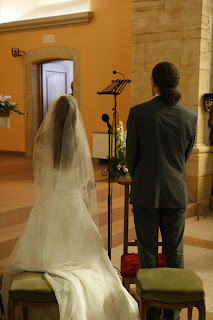 Picture is courtesy of my step-brother V, I hope he doesn't mind. He was the photographer for the wedding, and his pictures, I must say, are remarkably non-blurry and very impressive
You know, sometimes in life, I figure I'm too lucky for it all to be true (not always, though. Mostly I forget, but I really am very, very lucky). This is exactly how I felt last sunday, sitting in church next to my sisters, at my brother's wedding, listening to the choir in the church of my grand parent's village with the whole family. I just watched all the people around me, and figured I was just plain lucky. If I ever have children, I want to have a lot of them, so that they're as happy as I am to have awesome brothers and sisters.

As for my brother's wife, S, she looked amazing and perfect. She makes me feel austenian and want to use big words and say "you're my sister now". Don't ask me. I'm so very glad they got married. I'm so very glad they're coming back to France and we'll get to see them more often, because I really missed them a lot.

I look at them and I figure : I wouldn't see them anywhere else with anyone else. They kind of just belong together, in a very logical way. You can never be sure of anything, and as I said, I have not seen much of them over the last few years, but when I think about them, I figure there must be an equation somewhere that's just been perfectly balanced. They're a reason to be optimistic, and I wish them both all the very best.
Publié par Claire à 14:52