Kissing all the girls and blowin' the bad guys away...

I'm all ecstatic and glad and happy because guess what: I have internet in my room ! I am right now writing from my little room in Brussels, and I don't even have to spend a penny on coffee ! How about THAT! I've been in a brilliant mood ever since I came back anyway, because I've had great holidays in Alsace, and I've seen all my friends and partied, and slept and laughed, and I feel great. Also, I did not have classes today, so I pretty much spent all day sitting here watching Torchwood and eating grapes, until I realised I had access to the net, at which point I pretty much came directly here. I guess I might be high on vitamin C, I eat so little fruit, usually... Also I've seen James Marsters, in Torchwood (you know, Buffy's Spike?) and he always makes me smile. 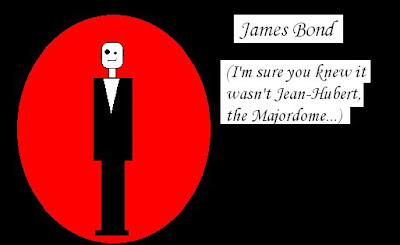 Anyway. So yeah, I'm back, and I can write the long awaited post about Quantum of Solace. (Long awaited by me, since I've been wanting to see the bloody movie ever since the credits first rolled on Casino Royale). I am not going to write some more about the shower scene in Casino Royale. I'm just going to mention it, because it's so great. I'm also not going to write some more about how cool Daniel Craig is. I'm just going to say, if I marry one day, I have a list from a previous post about being 7 feet tall, liking curry and wearing a cape, well, now, he'll also have to be able to lift up a moped + its rider single handedly. That was just SO cool Mr Bond, really.
But let me not be diverted from my holy mission by any weird looking Englishmen, however good they may be at lifting stuff off the ground: Let's get back to Quantum of Solace.
It is the male equivalent of a musical if you ask me. Replace the songs and dances by (truly amazing) stunts and wild chases, and leave the rest as it is. Well, nearly. It was pretty good, and really funny, once or twice, but it's a good thing that I had actually seen Casino Royale before, because the scenario is a little blurry, and it's all mostly about Vesper and revenge and understanding what happened exactly. Vesper, whom I missed a lot, because if you ask me Eva Green really did set really high scores as far as James Bond girls are concerned. She's just absolutely brilliant. Her successor is pretty good, but not nearly as good as she was.
Also, it was really moving at times, only I couldn't really concentrate because
a) I was too distracted by the weird looking Englishman's putting on his coat/wearing beige trousers/smiling (once, maybe, I think)/being extremely cool and sleek and great on every level.
b) I was too busy trying to understand what the hell was going on with the evil, rat-looking French villain (I saw the movie with my friends V and A, and some details still escaped us after putting together our different understandings of the scenario.)
c) I was too distracted by the stupid stupidheads who came to see the movie just so that they could annoy other viewers. Honestly, could anyone tell me why these guys pay for their tickets? They spend their time calling each other (on the phone, yeah), playing video games (on the phone, re-yeah) and going in and out of the cinema...
d) I was too busy trying to understand why they had chosen such a weird, uncomfortable title. Kind of understood why in the end, but I still wish they had called it something dumb like "Don't die until tomorrow", "Diamonds are nice and shiny" or "Go ahead and shoot people". Hee hehe. Daniel Craig in "Go ahead and shoot people". Now that's appealing.
Well, this post is getting really really long, so I'll just stop now, and maybe go for a walk or something, because all the oxygen in my room will soon have been used up completely. Just two things before I go:
a) Here's to F, who's in Japan. Hope you're having a truckload of fun! Two truckloads ! A lot and a lot ! Sleep a little, if you can, and go see James Bond when you come back, I'm pretty sure you'll like it. Not quite as inspiring as the first one, but there still are interesting stuff about raw materials ;)
b) David Tennant has stepped down as Dr Who. He was, is, and will probably always stay the best Doctor in the Galaxy. I hope we'll get to see him in plenty and plenty of other stuff (I hear he's going for a career in theaters now, which is great, but come on, what about me? I'm in France, I can't go all the way to London to watch you!) However, if you hear me, David T Russel, I know of a guy, he's brilliant, would make a wonderful Doctor, and keeps playing in verry verrrrry bad movies in recent times. I'm sure he'd be delighted of the opportunity. A guess, anyone ? -yeah, that one's really hard...
Publié par Claire à 07:05