On the road again...

Well, well, well... I don't know if you intended to go out with your car any time soon, reader, but if you're French you'd better not. First of all, the roads are packed, because of train strikes, which encourage people to take their car and take their transportation into their own hands. It leads to terrible traffic jams, and is very bad for the environment, but I'll stop

complaining right now, because I still need to take the train tonight, and I don't want to be kicked out of it. I'm SURE all SNCF people spend their days at home reading my posts, of course. Hey there Mister Train Ticket!!
Well, anyway, traffic jams and evilness to the environment is not the only reason why you should not drive these days: I'm out on the roads again. Indeed, I'll be trying to get my driving licence on Wednesday next week. So I have to train (as in practice). It's bad enough usually, you never know when or where I'm going to be on the road, but NOW, it happens really often, so STAY AT HOME. Especially on Wednesday. And I'm not saying this so that you won't get an accident because of me, of course, I'm saying this so that you won't bugger me while I'm driving. Indeed, I have a really bad case of "OHMYGODACAR!!! STOPSTOPSTOPSTOP!!!! But didn't you see, Mr. Driving teacher? That crazy man was driving a car!!!"
Or course, driving teachers don't like that too much. Yesterday, 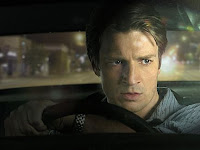 for example, during my lesson, I stopped at a greenlight (which was green), because I was afraid a car from the other lanes would not stop. So the teacher told me, "no, girl, you need to go through when the light's green, where did you grow up, in a cave?" I was tempted to answer "no, I was raised by my hero parents, which is why I'm such a balanced person, and don't find it natural to travel at the speed of light in a little tin box". But I did not, because yesterday's driving teacher had apparently been in the army, and besides, he was really cool and I should stop making fun right now. Point of this is, at the next greenlight, which was... well... how should I say... dark orange, I thought, GO! GO! GO! It's like the Pirate's rule, Claire, don't forget... "More actual guidelines"... And I tried to go through (A life lived in fear is a life half lived...)
As I said a little earlier, I'm trying to pass my driver's licence on Wednesday... 5 days or so, to learn that greens means go and red means stop. Do you think I can do it?
Well I think I'm going to need good vibrations, so I thought I'd tell you. Have a really nice day, reader, I need to run now, a greater cause is awaiting!!
Publié par Claire à 23:42