The phaaaaaantom of the Opera....

Yeah! Yeah! Yeah! One more musical post! I looove musicals, and I've seen one lately which was pretty good, so I thought I'd tell you a little about it, reader!
I have watched The Phantom of The Opera the other night, and I found it really nice. You might not know about it (as far as I know, it was no 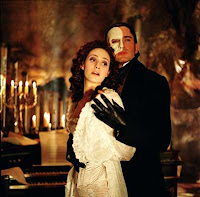 box-office hit) but it's really pretty good. Whether you like the music or not, the actors are pretty good, it's funny and entertaining, in a really classic kind of way (not a single pinch of "second degré" as we say in French, the movie could have been made in 1945, which is why it's so original and cool). Besides THEY SING ALL THE TIME which is one of the things that make me like a movie, whatever its other faults may be. (that sentence doesn't make sense, please forgive me, I'm sick).

So, go ahead and watch it, it's pretty good. Besides, you will have an occasion to watch Gerard Butler (you might remember him from 300, another really classical movie which could have been made in 1945, except for the special effects). He plays with his cape every 5 seconds. I don't know, he must have a thing with capes, that man (though in the Phantom of the Opera he has the decency to wear something more than briefs underneath, which is very polite. A shame, but very polite.) If I marry one day, let it be written in stone, the man will have to wear a cape. One more criteria. Like curry, be deaf, wear a cape, be 3 feet tall. If you find anyone matching this description, please, give him my phone number. Oh, yeah, male would matter, and human, as well.

Apart from all that, I am in a bad mood, because, as I said, I'm sick, and besides, I forgot my wallet at home, and now I'm all stressed out. The nice guy from the university's computer room let me use a PC even though I did not have my student ID (he's a hero, please, nice guy, if you hear me, I'm sorry for saying you were a monster a few posts earlier), so it's not as bad as it could be, but still. I don't like not having my wallet, and I'm starving to death. Good thing is, my mother and my best friend V (heroes, the both of them) teamed up so that I could have it back by noon, which should help me be saved from starvation by my credit card (which is, in its way, a hero too. Used and abused, but still a faithful servant...)

It's me, the famous friend V.