Roses are red, violets are blue...

Now, reader, please do not ask me why the title, I have no idea. I had no idea and no title, and now I have no idea, but at least I have a title. It's magic.

Anyway. I know I have already done so in a previous post, but today, I want to tell you about Dr Who. Last time was some time in January, and at the time, I said "No matter what Englishman he's played by". HA! How terribly Naive of you,

January's Claire! You knew it even then, poor you, if not played by David Tennant, why should anyone care about Dr Who??

I don't know if you've ever watched an episode of Dr Who, reader, but if you have not, please, do, for my sake. Especially if you are French. Do watch Dr Who, so that I am sure that season 4 will be broadcasted in France like seasons 1 to 3. Well, I should not really attempt to number the seasons insofar as the series actually started in 195o-something (I don't really know when it started, but it was a long time ago) so the numbers must be even more confusing than those of the pre-sequels of Star Wars. Four, five, six, one, two, three, put these numbers in the right order, you might win a trillion dollars!

Like, you still think about it the following day, and you imagine how cool it would be to be allowed to actually meet the Doctor... Fat chance of that ever happening. But hell... If I ever wrote a book, the main male character would be based on David Tennant as the Doctor. Hint of Scottish accent included. (By the way, I would be interested to know why a Time Lord come from the end of the galaxy would have landed a Scottish accent. But I like it in any case) If I ever wrote a book, which is extremely unlikely to happen. And if it ever does happen, I'll probably have forgotten about this post. But if I had to write a book today, well, the main character would be based on... you see what I mean. Oh, and let me insist on the "based on" because I'm not one of those crazy fan-fic writing fans... He'd just be like the Doctor.

Besides, I think writing the pitch of an episode of Dr Who could be achieved by a seven year old. Because, just like Russel T Davis (the actual writer of Dr Who), seven-year-olds have brilliant ideas and a lot of imagination, but then they get carried away, and their parents come over to take them home, and they need a sonic screwdriver to save the day in less than a 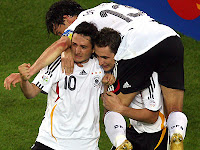 minute. Russel T Davis's parents have been replaced by the 40 minutes' format of today's series, but you get the idea I'm sure.

Not much to tell you about what's up in Saarebrücken, really, except there's a German guy playing Greensleeves on the bagpipes at my window. Germany's mourning the loss of the European Soccer Championship. No use playing the bagpipes now, stupidhead! It wouldn't have happened had Oliver Neuville been on the field!! They should have called ME! Ooh, my, we seem to have a situation here, he switched to Amazing Grace... I have to get away!
Publié par Claire à 01:43