Well, reader, I did it again. I've got a weird curse on me, I think it's related to the one that makes me eat everytime I watch CSI... I know it's going to make me pukey, and I still decide to eat, generally gross things like broccoli with tomato sauce or anything vaguely brain-looking... It's weird. Maybe I should write a book, like "Lose Weight With CSI"...

K's Choice is a brilliant Belgian group, about which I don't know much, but that they wrote one of the best albums currently on my player (Yeah, I know, reader, it did not have much competition, what with Abba Gold, the Spice Girls, and Shakira, har har har... it's easy to make fun.)
As I was saying, it's one of the best albums I have, but it's also one of the most depressing. And everytime I'm blue, I listen to it, and it makes everything even worse. I know it's going to make me sad and depressed, and yet, I can't help it.
But I still wanted to tell you about it, because it's such a brilliant album. Besides, it's not really depressing, if you look at it properly. Some songs are actually all the opposite. But those songs which are depressing REAL 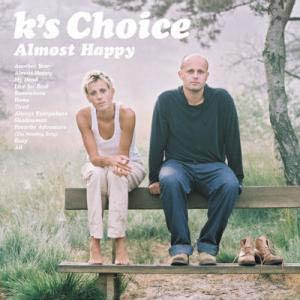 LY get you down. (-I refer here to "Shadowman" and the bonus track -which should be delivered with a pack of Lexomil...)
Anyway. I don't think I'm making such a good advertisement for the album, but really, it's beautiful and you should listen to it. The "Almost Happy" one is the only one I've ever heard, but I know there are others, maybe more rock'n'roll, I guess. Oh, and they wrote the great "Virgin State of Mind" song, which is also in the soundtrack of Buffy the Vampire Slayer.
There we go, reader ! That's about it for today! I hope that you're doing good, and I'm going to the kitchen see if I find a truckload of chocolate... Dream on... Well, I guess I'm just going to keep pestering Bernie till I find something to cheer me up ! YouTube, here I come !!
Publié par Claire à 07:56