Happy new year!!! Happy New Year! Love, health, money, fame, glory, riches, and anything you might wish for!! I don't know if you have made any resolutions for the new year, as far as I am concerned, I stopped trying, because I never keep them anyway. But good luck with them if you have, however!!
Today, I wanted to tell you a little bit about what I watched on TV yesterday, i.e. Dr Who. OK, reader, Dr Who is far from being perfect. For one thing, it might well be the uglie 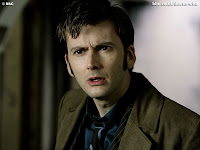 st TV series since "Xena, the warrior princess". Which is really really ugly. I watched some pieces of an episode of Xena today, and it's amazing how big a percentage of the dialogs is actually composed of screams and yells. You nearly need subtitles to explain what she really means... "Yaaaaah!" means "Don't touch my sweet Gabrielle, but "Waaaargh" means, "don't you touch my sweet Gabrielle". It's all very varied. Anyway. This post is not about "Xena the warrior Princess", even though there is a lot to say about her, it's about Dr Who. Where was I. Oh, yeah, bad things about Dr Who.
I never understand what's happening, and I never have any doubt that things are going to be OK, so the suspense is a little wasted. Also I hate his name, because when I try to talk about the show in French, I never know how to pronounce it. Comes out kinda like "docteur ouh" which is ridiculous.
But, even if I only saw three episodes so far, and never any one of them from beginning to end, I must say that Doctor guy, whichever weird-looking Englishman he's played by, has got something for him. I don't know if it ever happens to you reader, but sometimes, 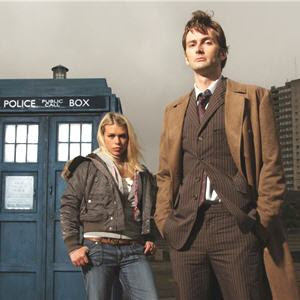 you watch something on TV, or at the cinema, and you think "I could fall in love with that character." Well, it was like that with Dr Who. Even though I hardly know him, and stuff. By the way, if you are a guy, and thinking about Scarlett J. right now, please, write me an e-mail, I have some stuff to tell you, about her naming her breasts and... well anyway, this post is not about Scarlett J. either (thank God for that). It's about Dr Who.
He was there yesterday (in my TV set, I mean, I'm not that crazy...), asking two different girls in two different episodes to follow him to the end of the world and stuff, and had it been me, I would have said yes, both times. Even though he's likely to be half my size and weigh less as me. Less than 5 movies-or-TV-characters spring to my mind when I think of people who have made me feel like that... Paul Bettany in Wimbledon, Nathan Fillion in Firefly (all episodes), Spike in Buffy the Vampire Slayer (can't remember the names of the episodes, there are too many of them) and also Denzel Washington in Much Ado About Nothing. It's not just about being good looking, and stuff, it's not even about the movie being great (as has been demonstrated by Dr Who), it's just some kind of feeling that I get sometimes. Weird.
Anyway. I have to go now, and annoy my sister, who's trying really hard to get some work done in spite of her being sick. It's my holy mission. Or maybe I'll just go bake some bredalas in the kitchen (weird how no one ever bakes bredalas in the bathroom...) in order to keep it up with the indigestion. Ah, the blessed post-Christmas days... That sweet taste of... no, OK. Well, reader, let me once again wish you all the best for the new year, truckloads of happy events, beautiful days, party and enjoy every 525 600 minutes of it. (Thank you, Rent, for sparing me the good half hour it would have taken me to actually count those...)
Publié par Claire à 03:45