Hey reader!!
I was looking for a good post subject today, (which is kind of difficult, since I decided not to read anything in English or in French before the end of the holidays -I need to keep the work up with my Germa 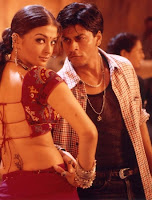 n, I can feel it getting worse and worse, and there's just no way I'll let all the benefit of my stay in Graz waste away before University starts again. After that, OK, I may stop making efforts, but not before :) Anyway... where was I??? Yeah, I was looking for a good post idea, but I did not find any. So instead, I will tell you about my problem with meeting someone famous.
I have met two famous people in my life (well, actually, I have met one -famous only in France-, and I got to say "hi" to the second while being pushed hard in the back by a furious crowd of hysterical fans), and I still have not solved my dilemma: "What would I do if I got to really talk with someone I really like?", and "would I really like to talk to someone I really like?".
I am a big fan of lots of things, and I am prepared to do crazy things to prove it (like queuing for hours, mostly -my biggest record being the U2 concert in Paris and Shahrukh Khan's "appearance" in the biggest Vrigin Megastore in Paris). But then again, when I start t

hinking about what I would do if actually given a chance to talk to any of those people, I get all weird. What would I actually say? Like, I'm not the hysterical-screams-and-laughter-and-then-pass-out kind of girl (I don't think I am anyway), but then again, if you act like you're all used to it, maybe you might not look enthusiastic enough?
So I was wondering about that from time to time, and then I found Nathan Fillion's blog. Nathan Fillion is a great actor from a great TV Series (i.e. Firefly, I have already written about that). And thi

s got me really frightened!! Nothing seems to be OK! And then again, when I try to imagine that I am Nathan Fillion (hmmm... let me go have a look in the mirror... nope. I'm not), I can understand myself not wanting to be harassed by crazy people who talk about my backside like it's their!
I don't know. I think I'd still like to have a chance to talk to the people I like very much, if you take the "will they find me unbearably stupid and write mean things about me in their diaries" criteria away, be it just to say thank you. Not "Let's go to the caribbean together, Josh Holloway, I'm sure you'll like me once you know me", just "thanks", because I guess that's what would be most important. Well, reader, I hope you liked that very profound thinking, I am now going to go home, and try to uncook my brain, which has apparently been steamed to duh-ness...
Have a nice evening!
Publié par Claire à 08:03