Make your own kind of music

This morning, on my way to the metro, I was listening to the "Buff

y the Vampire Slayer" soundtrack. And suddenly I thought, Claire, that's what your next post is going to be about: Music and cinema. And music and TV series of course.
I mean, isn't The Music really important, don't you think? Can you imagine a movie without any music? Most of the times, what really gets you crying or worried is the music isn't it? The psycho knocking on a glass with his teaspoon in horror movies, or the guy with the violin in love stories. Or Ewan McGregor and his amazing voice in Moulin Rouge, like (yeah!! here comes a picture of Ewan McGregor!!).
Besides, what do all famous, mythic movies have in common? A famous soundtrack, you name it!! Star Wars (tatatataam taaam tatatataaam tam tatatataam tam...), Indiana Jones, The Godfather, Matrix (wake uuuup!!! Waaaake uuuup)... Same goes 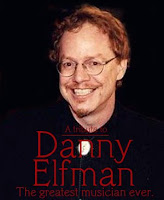 of course, for shows (Buffy, the X-Files (piu piu piu piu piiiii piuuuuuuuuu), Dallas...)
I think the composers do not get enough credit for their hard work. John Williams is pretty well known (he's the one who composed the music for all George Lucas's and Steven Spielberg's movies, plus a few Harry Potters I think), and so is Danny Elfman (all Tim Burton's plus The Simpsons), but other cool people like Klaus Badelt (the one who wrote the extremely cool Pirates of the Caribbean soundtrack), or Patrick Doyle (Much Ado About Nothing, some of the Harry Potters...), are not very well known at all. (Lord, reader, I hope you follow, my use of brackets is getting eerie...)
I have to say, I am always impressed by the multiplicity of the abilities of these people, but most of all by those of Michael Giacchino. He has invented all kinds of schpounks and bleeps and strange snorting noises for Lost (hey!! :D one more opportunity to stick a pic

ture of Josh Holloway in, reader!!), and yesterday, I went to the cinema with my sister to see Ratatouille (which, by the way, is not as great as it's supposed to be), and who composed the jazzy music, which was very nice?? Michael Giacchino!! Unbelievable, is it not?
Well, anyway, I found it really strange, but reassuring as far as his mental health is concerned. I mean, the poor guy has had to scratch forks against china for years, I guess he can't ever stop shivering, and now, there he goes, an opportunity to put his ears at rest! I'm very happy for you, Michael, if you hear me (yeah, we are very good friends, Michael and me...)
By the way, he also wrote the music for Alias, which is a good opportunity to add a picture of

Michael Vartan to this post... I just looooove blogging... :D
Anyway. My chinese lunch is going to be there pretty soon (hmmm.... I've been wanting to order for aaaaages and now it's time at last!!!)) So I guess I'll be leaving it at that...
Have a really nice day, reader!!
Publié par Claire à 03:54