I can't believe it!! It's 13:26 and nobody is eating yet!! They ordered some food, but since it's not coming, they just keep working!! Of course, that's not my style, so I decided I'd come and write a little post now that I have a little time!!
Have you ever felt like you were born in the wrong period, reader? Have you ever felt like the world was becoming kind of too modern for you?? Well, I feel like that pretty often, and my main cause for complaint is blue jeans. What do you mean, I'm very superficial??? I'm not. I just like dresses and long skirts.
Anyway, it 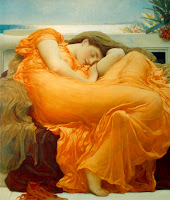 makes me depressed to wear jeans and trousers everyday. I just wish we were still in the romantic era, and could wear some clothes with cool names like a crinoline or calico. I'd miss some stuff of course, among which blogging, but I could always write a diary, and then it would be pubilshed and become a bestseller!! (What do you mean, reader, my blog would never become a bestseller?? I don't quite like that tone you're using today, really...). I'd miss rock music and stuff as well, but then again, you can't miss what you don't know, can you? And I'd still have nice folk music at various balls!! Wouldn't it be nice?? I could dance the menuet, and stuff! And speaking French would be considered as very refined! Not just snotty!!
Besides, at the time, it was good to be a little plump, and curly hair was in fashion (just look at the pre-raphaelite paintings -Ha hahaha, I love to pretend I'm very educated- they all have frizzy hair, and nobody makes fun of them!!!) Of course, I also like the idea that staying where I am and having a decent conversation would be sufficient to get a wedding proposal. 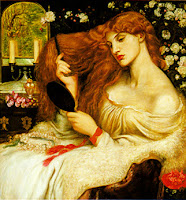 Yes, I know, the condition of women was apalling, I would have had to stay home and embroider stuff, ride horses and sneeze endlessly, and would not have had any modern comforts like hot running water, or panadol. But it's not going to happen anyway, I won't be miraculously sent back in time by a malignant spirit, so why shouldn't I pretend it would be all Mr Darcys, flowers and lillies of the valley??
Besides, I just refuse to think that people, and women, were generally less happy at the time. I'm not saying I would have been happier then, it just suits my fantasy to imagine I would have been. It's kind of twisted and doesn't really make sense, but anyway, there it is.
What I really miss today, though, (apart from calico and crinolines), is things that last forever. Of course, I know, nothing lasts for ever, but still, there was a time, when you got married, it meant that you were going to live with your partner for ever. (You'd better pick the right one, really...) Now, when you get married, it doesn't really mean much more than, "I take one more step to prove my love", since you can get a divorce anytime. Same goes for the earth, seasons and nature. Once upon a time, it was all going to last until the end of time, and now, it will just last until we make it so rotten that it stops!
Anyway. This is getting way too far, and I think it's about time for Miss Garteiser to go and eat something... Hmmm... I made a nice sandwich this morning, I can't wait to eat it!! Smoked ham and goats cheese... Wouldn't they eat just that in Bath?? :)
Publié par Claire à 04:25