Today, reader, I want to tell you about Lost. Therefore, the title of this post is the opening credits' music (I'm sure you had noticed).

Anyway. Lost is a fantastic series, of which I would never miss an episode, which is why I watched all three of them yesterday evening, which is why I turned off my alarm clock this morning in an unconscious attempt to stay in bed and keep dreaming about airplanes full of handsome men crashing down on Paris. It was successful, until I woke up and found out that it was 9.00, which is the time at which I'm supposed to start working.
I just hate sleeping in, reader, I don't know about you, but it makes me crazy. I mean, one minute your head is resting on your pillows, you are swimming in an ocean of bliss, you brain is switched off, and life is beautiful, and the next you are trying to cram yourself into an already packed train, and you have to think, and you have to be polite. It's just too brutal. I hate my alarm clock. I think I might become an ermit, just so I can wake up when I feel like it.
It's just a question of picking the right place! I'd be an ermit on the island where they sh 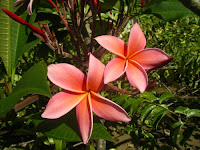 ot Lost. I'd have the company of the cast and crew once every year, and the rest of the time, I'd just be eating mangoes and roasting seagulls! Wake up late and kill your own food, that's my idea of paradise :) Of course, you don't want to do the same in Alaska, because apparently, their national dish is made of seals' poo and oil. And they don't even have bread to spread it on. I'm not kidding, I saw it on TV, so it must be true. Anyway, this post is getting nowhere, and I think it's time for me to go home, so I'll leave it at that for tonight.
I am translating some newsletter about laws on working conditions in Germany (how to fire people politely, and stuff), and my brain is just about to explode. I uderstand the sentences in German and it seems to magically turn into gibberish as soon as I write it in French. I say the same thing three time, it makes no sense, it's all very confused, and very confusing, and I don't even want to think about the time when I'll have to proof-read the whole thing. The Claire of tomorrow is going to hate my guts...
And no, indeed, this post was absolutely not about Lost, but I thought pretending it is would be a nice justification for me to put nice pictures in and a silly joke at the beginning.
Publié par Claire à 07:20