All the way from China

Hello!!
Well, usually writing a post is the last thing I do in the evening, for once, it's going to be the first thing I do in the morning. And it won't be very long, because I have to run (I think I have some kind of test tonight, but I can't really remember the subject... I know it's important, but.... Ooooooh!! Yeah!!! Just came back to me... :D)
Anyway, the reason why I'm writing this instead of focusing on learning by heart the five first chapters of Jaywalking is that I had one more answer from an expat which I wanted to share with you!! It comes from a woman who lives in America, and she studies in the same lab as Sabrina, my brother's wife, whom I would also like to thank for passing my questionnaire on!! Very very thoughtful of you!!
So, as I was saying, the answers come from Ting He (Thank you sooo much for answering!!), who is from China, and is now working as a scientist at the Oklahoma Medical Research Foundation. Here is what she answered:

I came to America to study Biomedical sciences and get a Ph.D degree.

2. Did you run into any difficulties there (Paperwork, integration...)
Yes. I think I have a lot difficulty in learning the language and integration.
3. What are your two favourite aspects of the American culture? The two you like least?
First, I think most American people are friendly and patient and care about the other’s feeling which makes me feel good.
Secondly, I think the detailed laws and rules make the society run smoothly.
In terms of the worse aspects, first thing is that I sometimes feel a little insecure (it seems some neighborhoods are not so safe). Because the law allows individuals to have guns, and that makes me feel endangered.
Another thing is that there is no or little public transportantion, which makes life harder for those people who don’t have a car. 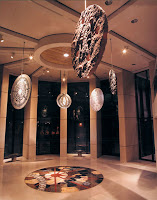 4. Do you think that your experience would have been different if you had been other than Chinese?
I think it would make a big difference if I came from a European country or a country whose native language is also English. I know most of the European country are not English-speaking, but they learn it much more easily than us. Also, they share a lot of food habits, culture and even some history with America.
5. Generally speaking, on a personal level, is your experience abroad positive? Would you like to make it longer?
Overall, I would say it is good to stay here, especially for my professional development. But for us who come from Asian Countries, it takes a longer time to adapt to this situation. My husband and I would like to stay in the US for our Post Doctoral job after we get the Ph.D degree. But we can’t tell now where we would like to go after that.

There you go reader!! I would like to thank Ting He once again for answering my questionnaire, it was really nice of you!! And also, while I'm at it, "Personal message time", I'd like to wish my brother good luck once more, his big presentation is today!! Good luck, good luck!!!
Publié par Claire à 01:54