London Calling -now this one was OBVIOUS!!

Good evening! Or should I say good morning? I'm not quite sure anymore...
I had a funky day, really, fainted on the Schlossberg!! I went for a walk there, with one of my Austrian friends, but I hadn't eaten, and I don't know, the sun, the beauty of it all... such a shock to my poor nerves, that I ended up chewing on the turf, amongst dog droppings and quite a lot of astounded Austrians... Nice, interesting experience. Have to do it again some day...
Anyway, I'm not writing this post to tell you about this, I want to share with you, reader, the interview of my sister Françoise, who is a translator in Paris now, but who also spent some time

working in London. Her answers are really interesting!! Thanks, Françoise, for taking time out of your busy schedule!! And for teaching me how to spell busy!! I would probably be studying accountancy now, if it wasn't for you!
1. Why did you go to and English Speaking country?
For a whole lot of reasons! I always loved the Anglo Saxon culture (US and UK), literature, movies, music, and especially the language itself. After spending two stays in the US, I thought it was time for me to give a try to the UK English -- and especially London, which 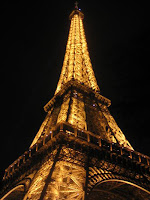 attracted me particularly ever since a flash visit there when I was 13: I promised myself that "one day, I'd live in London", in front of Regent Street at dusk.
2. Did you run into any difficulties there? (Integration, Paperwork...)
Not really... The hardest part was probably the everyday life: The exorbitant prices, even for basic products, the housing difficulties (extraordinarily expensive, for sometimes barely acceptable living condition), unbearable public transporation that would get me into weeping fits of rage, unbelievably low quality medical assistance... And the accent of course! Until then, I never really had a problem understanding Americans or English, but arriving in London, I was really shocked! I was completely lost for the first week, I did not understand anything. And then, little by little, I got used to it... I even ended up learning a bit of cockney!
3. What are your two favourite aspects of the English Culture? The two you like least?
Hmmm... Only two?
Let's say, the good sides of the English is their willingness to let you live your life without staring at you and commenting on everything you do. I also like their pragmatism, insofar as when you are in a sticky situation, well, you just try to make the best of it, look at the bright side, and try to make things better, without dramatizing or launching into tragic tirades. I think in France, we should follow their example a bit more.
Bad sides would be the downsides of the good sides: Letting people live their lives, it's also sometimes indifference and coldness, a "fend for yourself" philosophy, that is particularly visible in London. As for pragmatism, the downside of that would be an opposition to change, and people who are too willing to "make do", when sometimes it would pay to get moving and complain (like we do in France!) in order to make things better. Oh, yeah, and this too: on a

national level, the English have a kind of superiority complex which make them very arrogant and is often doubled up with an astounding primary racism.
But in the good-things-that-happened-to-me-while-I-was-there department, I'd add: the lively and cosmopolitan side of London... Summer evening in "pub gardens"... mostly free museums... Foyle's giant bookshop on Charing Cross... and of course the essential English humour, in any situation.
And for less good things: Gastronomy... rush hour in the tube... and the weather!!
4. Do you think your experience would have been different, if you had been other than French?
I think so, yes. It's a bit of a shame to say it, but as a French, you've got a little headstart (accent, French girl's reputation, Beautiful Paris, and the whole legend...)There are some tough-skinned Francophobes, but even they respect the sacrosanct English politeness. And I was quite priviledged, I had a job, some acquaintances etc. I think things are very different for a freshly landed Pakistani, Bulgarian or Chinese girl with nothing to start from.
5. Now that you're back, what is the general outcome of your stay in England? Is it a country you could live in for a longer time?
Excellent outcome: I learnt a lot, both professionnally and personally, (not to mention the language, of course). Living abroad is tough, sometimes even despairing... but the discoveries and the things you learn largely compensate the blues and the obstacles. And yes, I do think I could live there for a longer time without too many difficulties... keeping in mind that in London, one had bettter be young, rich and healthy.
There you go reader!! I should have a fifth one of those pretty soon! I hope you are enjoying them as much as I am!! I tried so sneak some other questions into those, in order to extort money from my siblings, but it never works!! I think they're just too clever. As for me, I'm getting sillier and sillier, so I guess I'll just follow my sister's advice and get in bed now... Hmmmmm... Pillows...
PS: I almost forgot, but there was a presidential election in France today, and I want to thank any one who can hear me for not voting for Le Pen (the Awful Extreme Right-Wing Candidate), first of all, because having him at the second ballot makes me feel ashamed to be French, and second, because being ashamed to be French when you're the only one around is really terrible. So thanks guys, for not putting us through 2002 all over again!!
Publié par Claire à 15:14

Claire... What are you doing? YOu fainted on the Schlossberg?
I assume you are alright again, else you wouldn't have written this post, would you;)
I love your blog, your writing style is great...
see you at tomorrows progress-test :)

Thanx Birgit!! Yeah, I did faint on the Schlossberg... I promise you, it's the beauty of Austria that got to me, I'm sure... I'll put it this way, otherwise, it would mean it's my being silly and not eating in the morning that's to blame, and that would be too bad!!! Thanx for commenting!! I loooove comments!! See you tonight!!