Let the Sunshine IN!!!

How have you been these past few days? Here in Colmar, everything is going pretty much OK... The weather is just perrr-fect, except for the silly fact that my nose is red and sore from all this blowing... If I catch the guy who invented pollen, he's going to have a reaaaally bad time!!!

Anyway. Anybody who has had to sneeze three times per minutes during two days knows that it is enough to get you in a psychopathic mood... In order to vent all this anger, to let out all this bad, angry energy, and become a real shaolin master, I am going to write about "Dogville". I hate "Dogville". And I thought, today, I'm going to tell bad things about something, I guess it'll make me feel better. And maybe the almighty Lord of Cinema will be thankful for my efforts and will make my nose stop running. (Dream on...) 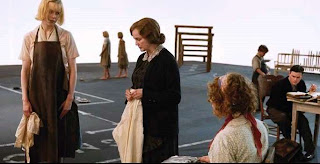 Anyway. Dogville is a movie by the (in)famous Lars Von Trier, a Danish film maker. He is famous for winning the "Palme d'Or" in Cannes for his movie "Dancer in the Dark", starring Björk. He is also famous for making really weird movies with a DV camera, involving lots of gross people and scenarios which make you vomit, or traumatize you forever. Maybe it's the other way around (gross scenarios and people that traumatize you forever), I can't remember. I haven't seen many films by Lars Von Trier, and I know a lot of really clever people who have seen them all and loved them all, so I guess maybe I'm just not clever enough, or not cultivated enough to properly appreciate them. But I'm sorry, I just can't watch that.

Before sitting through all of "Dogville", I had seen little pieces of "Breaking the Waves" and I had found it striking. I don't really know in what way it struck me, but the few scenes I've seen, I remember them very very well. So when "Dogville" was shown on TV (in the original version!! woohoo!), and that I heard my favourite actor starred in it (yeah, yeah, feather-brain is never far behind...) I thought, go on, Claire, watch it, what's stopping you?

I shouldn't have. I should have gone to bed. I should have put my hand in the toaster, it would have been more agreeable. Why should someone in his right mind want so bad to demonstrate that the whole Human race is just one big piece of crap? Why should someone wish to show anybody such a dreadful, awful, unspeakable story? What does it actually mean, for someone to be that hopeless about Us in general? I don't quite know, but it can't be a good sign.

The story is about a young woman, Nicole Kidman, who comes to a very small town, and decides to stay there (she is fleeing some kind of mafia, but we don't know more about that u

ntil the end of the movie, so I won't tell you more about it either). She meets the locals, gets a little bit more involved with one of them, a would-be philosopher (Paul Bettany, the one, the only), and fits in quite nicely, until everybody starts exploiting her and abusing her for ABSOLUTELY NO GOOD REASON in every possible way until she is barely more than an animal. Why would they do that? More to the point, why would a filmmaker write a scenario with no one in it to save? I don't quite get it.

Once again, I am conscious that it might be a problem with me, and absolutely not with the movie itself (though no, come on, you can't really say there's no problem with that movie). I found the idea of the "no set, no extras" quite interesting (I'm not being sarcastic there, in case you wer

e wondering), and the various actors were amazing, but what for? I refuse to think so bad of the human race! I think we are ultimately good, and that bad people are bad because bad things happened to them. And I am absolutely convinced that trying to make people believe otherwise is evil. EVIL!! BAD!! Like pollen!!!

Anyway. I think that's all I have to say about Dogville. I'd like all your opinions, though, please, because if somebody liked it, I'd be interested in knowing why... I think I'm feeling slightly better now... Must be all these bad energies escaping my mind and giving my blog a bad karma...