A Land of Hope and Glory

In order to celebrate this beautiful day, I decided to tell you about my Top Five Favourite British Actors. Once again, I can't take credit for this post idea, which I owe to my best friend V. This whole post is actually a kind of collaborative work between me and my friends who helped me pick and order... It was fun to do, nobody got killed... I think it's a very good idea, just the thing to go with the sunny weather. Besides, I figured British actors should be given some kind of motivation award, because why else would anybody want to learn English, if not to understand what they are saying with their beautiful accent in their beautiful movies? I know, it's my bad side taking over, but what can I do? If I don't talk about backsides and pretty faces once in a while, I get sick. So here you go. Next time, I'll write about my top five British actresses. Just before my post about Tolstoi…

1.Paul Bettany. He is tall, (1.93!! do you realize that reader?), blond and blue eyed, an absolute backside must, but of course, that has got nothing to do with the reason why I like him so much. He plays in really good movies, although he has played in very very bad ones lately (such as "Firewall", a terrible terrible work, starring Harrison Ford, the "DaVinci Code", or "Dogville", of which I told you already), but his other movies are just great. If you haven't seen "A Knight's Tale", "Wimbledon", or "Master and Commander", check them out, reader, they are ultimately cool. Especially the first two. 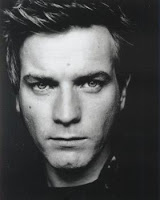 ample, I would state this as one of his particular talents. Haven't you seen Moulin Rouge? If I had to pick a Top Three list of McGregor movies, it would include Moulin Rouge, Shallow Grave and A Life Less Ordinary. And come on, reader, I didn't like the last three Star Wars movies either (well, the last first movies, I guess you understood…) but wouldn't you have paid to get a role in such a mythic saga? I would have, without hesitation. And without reading the screenplay. These movies are my entire childhood!

neth Branagh. Eternal gratefulness to Kenneth Branagh for updating the Shakespeare classics which I never would have watched otherwise. Even his 3h long Hamlet, with the father's apparition in extremely natural looking blue mist, and sound effects that would belong in an Ed Wood movie is worth the time…I would give a special mention to "Much Ado About Nothing" and "Dead Again".

4.Hugh Grant; I hesitated a long time before adding him to my list, because I was afraid I would look silly. But then I thought, c'mon, Claire, you are silly, and your reader has noticed that long ago! Forget dignity, and replace it with honesty, which is said to be a virtue. So yes, Hugh Grant would belong there. Note that Collin Farrell isn't in this list. Did you know that he was refused at the Backstreet Boys casting? (he he he). Anyway. Hugh Grant is great, even though it is easy to make fun of him because of his two facial expression and the fact that he only ever has one role to play. My favourite two movies with him would be "Sense and Sensibility" and "Music and Lyrics". 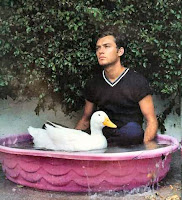 5. Jude Law. Yeah… I can't really justify Jude Law… he won his rank just with his eyes… I am ashamed. But he is a good actor though. I can't really remember in what, but he is…


I guess that makes it five! I have to stop now! That's terrible. But it's a Language Learning Blog, and no "Teen Dream magazine" article, so I guess it's better that I have to stop. The bad thing is that I can't blame the time, it's not even 7 p.m.! But, then again, I guess all these sweets must have turned my brain into marshmallows… I'm melting under the Alsacian sun!! That's a perfect excuse now!

I hope I'll find something clever to write about next time, why not JWI, which I have continued to read, and am enjoying more and more. I actually find it readable, if you go on reading without the missing words. It's not very comfortable, and I'll have to read it again with my vocabulary list, but I think it's good fun, and also interesting to know more about Cork, which seems to be a little bit more authentic than Dublin.

Well, reader, the sugar rate in my blood is getting lower and lower, so I have to run, and eat some more chocolate, before I drop dead… Bye bye! Have a nice Easter!!
Publié par Claire à 02:07