Well, I have a big important news!!! I am bored AGAIN!!!!! Why, why, why, can't I simply get to work? It would make my boredom problem, as well as my amount of homeworks still to do, much smaller! I dont know, reader.... maybe I just lack vitamins... or a brain...

Since I am not correcting my German translation (oh my, all these mistakes, it's really depressing... I'll do it some other day), I figured I might as well tell you about one of my health problems: The Quoting Sickness. But first things first, I have a personal message to write before I do this: 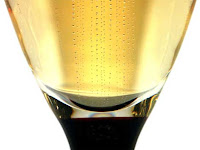 My brother became a PhD the day before yesterday!! Isn't that great?? Isn't that fantastic?! Well, reader, you might not know my brother, (though I interviewed him just for you a few days ago) but I'm soooo happy for him that I just couldn't resist telling you. I had to wait a little, because I wanted to give him time to tell everybody himself first!! But now I can brag about how clever my siblings are!!! Yeah! Yeah! Gooo team Garteiser!!

Anyway. Were was I?

When I was a kid, I used to watch the Star Wars movies a lot. I love those movies, I don't quite now why (actually, I do, it's because they're great), and I watched them so often that I learnt the dialogues by heart. And I kept quoting them all the time, to people who had no idea what I was talking about. "Try not! Do, or do not! There is no try" said the 8 year old Claire (I was blond and cuddly a 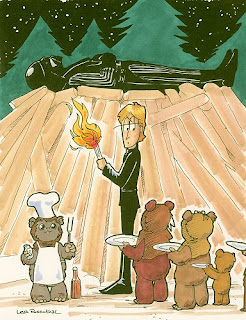 t the time, but already a tyrant at heart). It kept happening all the time, util I reached high school and decided to do something about it. Indeed, I grew tired of being misunderstood, and I got into trouble for saying "Get in there, you big furry oaf! I don't care what you smell!" to innocent friends of mine on various occasions (mostly at the gym). As I graduated from high school, I decided it was time for a change.

I prepared home made springrolls (they do look like they come from outer space, hence their presence on the menu, but they nearly taste like food...) and me and my friends watched all the episodes in a row. And I was really amazed, because even though I had not seen them in a really long while (time enough, theoretically, for my tastes to shift) I still liked them! And I still knew the dialogues by heart! Now, when I have a quoting fit, at least my friends know what I am referring to. Some of them actually have the quoting dis

ease as well, with various movies, and we can have nerdic movie-dialogues-conversations, we hardly ever have to make up our own lines! Good quoting movies would then be "Moulin Rouge!", or "the Matrix", among others.

I don't know if this happens to you too, but I sometimes have a song stuck in my head, and after a while, it gets really really annoying. This happens to me with pieces of dialogue as well. Even written dialogues, especially when they sound funny: "He would not rue his bloody blunder more than I now rue mine", says Rochester at some point in Jane Eyre. "Bloody Blunder"! Ha ha! If I start a rock group one day, I'll call it "Bloody Blunder"! (starting a rock group would probably be one, too, actually...)

Anyway. I wanted to share my experience with you, and maybe we could start an anony

mous quoter support group. Because it is sometimes embarrassing. When people say "Well, that's terrible", and then you try to refrain yourself, to keep your composure and then you start to sweat, you shake, you shiver, drool and dribble, and you end up screaming "Being on the street, that's terrible" and everybody stares at you. Can't blame them, but can they really blame you?