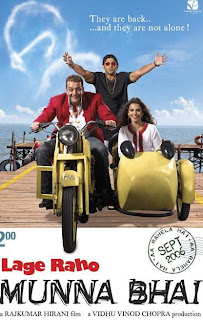 Hi reader!!
Well, this post is a little bit superfluous I guess, because I uploaded the following text on our brand new Wikibook thingy, but I'm not sure it worked, what with its brand-newness, so here is my little text about the "Here on Earth" programm I listened to the other day!! I just KNEW you couldn't live without it, so here it is, in case it's not on our Wiki...

(Oh, and if you get so interested in the subject that you want to listen to the program as well, here's the link!! http://www.wpr.org/hereonearth/archive_070115k.cfm)

The program I chose to listen to on Here on Earth was entitled “Gandhi goes to Bollywood”. The title appealed to me, because I am very interested in Bollywood, so I decided I’d try to know a little more about this topic. Besides, the movie the program is about is part of a little series, and I had seen the first one, so I was a little intrigued. The movie Jean Feraca and her two guests are talking about is called “Lage Raho Munna Bhai”, and it is about a little Mumbai thug who discovers that the best way to lead his life is to do it according to Gandhi’s principles of non violence, truth, fearlessness, compassion, and respect for your enemy. Thus, the film delivers a message to the viewers, about how Gandhi’s principles could help them live their lives, and how they could, still today, help India solve its problems. Indeed, according to both the interviewer and her two guests, specialists of today’s India (One of them is a professor, and the other one the screenwriter of the movie, Abhijat Joshi), although the image of Gandhi is omnipresent in the country, and everybody is referring to him very regularly, his basic ideas are not respected any more: he became a saint, and therefore, he is not considered as a real person anymore, who can be concretely imitated in everyday life.

The interviewees talk about how widespread movies are in India, and how they can sometimes change the whole society, or generate real changes in the life of the country: Indeed, in this movie, they try to uproot superstition and corruption, and they are convinced that it will make a real difference, they are not just making a statement, they are making a tangible political action. I think this aspect of the interview was particularly interesting, especially when one sees what movies are coming out in Bollywood today: I was very shocked recently, to learn that a movie such as “Rang De Basanti” was nominated to the Oscars for “best foreign movie”. The movie is about a bunch of young people who decide to take violent action against the government, to take revenge for one of their friend’s death, and fight corruption. I was shocked when I saw the movie, because I had heard that it was a great success in India, and had raised awareness amongst young people, who now knew they could do something for the country’s future.

I found it frightening that such one-sided movies, praising violence and political murders without showing the problems these could lead to, could have such a big impact on the people’s opinion. It first made me laugh when I heard one of the most respected directors in the Bollywood film industry talk about how his movie had helped improve the relationship between India and Pakistan, but listening to this interview, made me realise that it might actually be true. I suppose it is a good thing, but on the other hand, it could also very easily get dangerous and frightening to have such easy means to manipulate the public opinion. We have similar debates in Western cinema every time a political movie such as “Fahrenheit 9/11”, “Bowling for Columbine”, or “An Inconvenient Truth” comes out: It is sometimes difficult to keep in mind that such movies are not always completely objective, even though they are of public interest.

The interview goes on to talk about a little paradox about the movie: although it is about Gandhi’s life and his non violent ideology, the leading actor, Sanjay Dutt, was convicted in January for possessing weapons and having taken a part in bomb attacks in Mumbai in 1993. It is not quite clear whether he was actually guilty or not, but the theme seems to embarrass the screenwriter.

I was very impressed by what a faithful portrayal of Bollywood this interview is: it addresses many problems, such as clichés, or over-simplifications in movies, or the links between the film industry and the mafia, talks about the role of music in these movies, about their impact on the population, and besides, it taught me quite a lot about India itself: one can see that Gandhi is not the figure we might think it is, with an outside eye, although he is treated with great respect (the screenwriter keeps calling him “Gandhi-ji” as a mark of honour). Altogether, I found this program

very interesting, and the only critic I could make would be the host herself, who cannot seem to pronounce Indian names properly, and is a little bit contemptuous to the screenwriter sometimes.
Well, reader, I think that's it for tonight... I'll just add one more picture, if I don't add him, I'll feel sick and won't be able to sleep all night... :-) Always need to find excuses...
Publié par Claire à 13:12