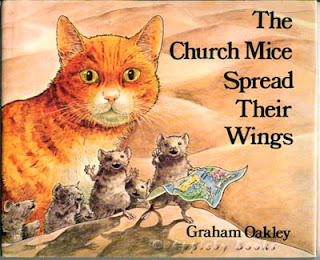 Today, I want to tell you about "The Church Mice", a series of books by Graham Oakley. I was looking back at my childhood, and trying to find when my interest in English dated back to, and I decided that... well OK, no, it was actually my sister who told me that it would be a good theme. And it's a very good idea.

I don't suppose any of you have heard of "The Church Mice, Arthur and Samson's method: learn English with humour". For one main reason, i.e., it's supposed to be a method to learn English when you are a French kid, which none of you SUK4 students are. But I figured it was nevertheless a good thing to write about here, because it is, after all, despite all these terrible backside references and lots of nonsense, a Language Learning Blog. So let's be serious for a second.

As you might have understood, "The Church Mice" are a series of children books. They are written both in French and in English, with the English version on one side of the page, and the French one on the other. It is about mice, which live in a church, in the company of a religous cat, which has learnt that one should love, and not eat, his neighbour. Both races cohabitate more or less peacefully.
They are very funny books, with really good illustrations by the author of the texts, which proves that the guy is really talented. My personal favourite is "the Church Mice at Christmas", when the mice decide to raffle the cat, in order to get money for their christmas party. 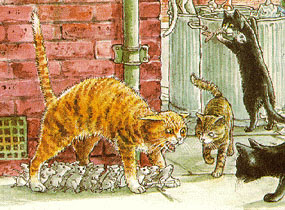 It's very English humour, and the good thing about it is that it gives you good insight into the English culture. Well, they might actually be kind of outdated now, because they were published in 1984 (gosh!! 23 years ago already!!), but they are nevertheless really cool, and you get acquainted with things like "peaches in brandy" and "pickled walnuts". Besides, there is a good vocabulary list at the end, which is funny, and interesting, and helps you understand more precisely what different things are, which might require a longer definition, and not just a French equivalent.
Of course, one can debate about wether or not having texts written bilingualy actually is a good method for learning a foreign languages, or wether one perhaps ought to read things in just one language, in order to avoid getting the bad habit of translating everything in your head instead of actually thinking in the foreign language. But in my personal opinion, though it might not be the best method, it is nevertheless a good way of getting kids interested in learning, which is already a victory.

The point of writing all this when I know that none of you would read it in French is also that I suppose it might have been translated to German, because, after all, why not!!

Anyway, I hope this will be a little bit useful, in case you want to teach English to your 9 years old cousin (or sister, or brother)... Or just have a little relaxing, easy read, in order to rest your brain after 1 chapter of JWI... I really like them, even now that I'm supposed to read books which don't have pictures in them...
It's time for me to go to bed now, I guess... All my family is coming back home for easter and my mum just got out of the hospital, so I guess tomorrow will be a busy day!! I love familly reunions! Especially when they involve a lot of chocolate eating. And coming back home after a long while.... Good night reader!!
Publié par Claire à 14:07