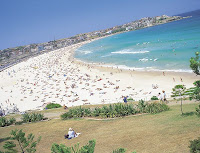 Well, reader, I'm afraid to say my english speaking life is very monotonous... Hardly anything to say about it... Ah, yeah, actually some guy in a very expensive car asked me for the way to his hotel... Does that count? I don't think so. I'm afraid it's not even worth talking about. So instead, I'll tell you about something interesting, i.e. Sydney, Australia.

Having been to Sydney Australia is very satisfying. Because then you come back and say "I've been to Sydney", and everybody looks jealous and says "oh I soooooo wish I could go toooooo". Like that. And for many other reasons too, of course, about which I am going to tell you more now.

I've been to Sydney in 2001, and spent my summer holidays there, with my Australian family. It's a very distant family connection, so the family only spoke English with me, they were really nice, and I had a great time. I think it's the most English-enriching trip I've ever made, because I was so young and my brain was still nice and malleable. But also, of course, it was summer holidays in France, but winter in Australia, so I got the chance to go and study there for about one semester (three and a half month) in a public High School (Vaucluse High School).

That was really great and I got to meet so many people from so many countries, it was really fantastic. I made friends from Asia, mostly, including quite a lot of Korean girls. I remember 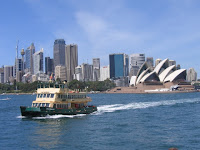 making a terrible face the day my friend Kathrine told me she had a bowl of lice for lunch. I had just read a text about WWI, and life in the trenches in history class, so I knew what lice meant, and I remember thinking that Asian people really had strange customs, before realizing that she was actually talking about rice, and I had just misunderstood her accent...

I did not meet quite so many students from Australia, though, because I was in an "English as a Second Language" class. But of course, it taught me what it was like to use English in my everyday life, and write papers, and essays and everything.

Sydney itself is a lovely city, where the sun shines everyday, and anywhere you go, you can't be far either from the see, or from some extra-beautiful park, with incredible trees, and parrots instead of bloody pigeons, like in Austria or France. The buildings are not that impressive, because it's such a recent city, but of course, they are still quite nice, and the whole place is very clean, and rich.

I am very interested in cinema, so I went to the huge studios of the 20th Century Fox, but that's a little bit overdone, really, and most sets are closed now, so don't have too great expecations for this one attraction. the Harbour Bridge and the opera are much prettier in real life than on pictures, though, so that's a consolation.

I did not like Sydney quite as much as I loved New York, though, because Australians are into sports and sun and outdoor activities, and I'm not so very interested in all that. More to the point, I hate running and sweating and moving, and I prefer reading a book on a couch at home to throwing a ball with all my surfer friends in the sun. But then again, I'm a bore. And I'll die at 30, fat and lonely... But I'll stand up for my opinions! reading a book is NOT doing NOTHING, and it's a very enriching activity, although it's not particularly good for your health or your social life.

One of the other reasons why I didn't like the city quite as much as New York might have to do with My French Pride. Somehow, I think Australians are even worse than we are, and are therefore sometimes difficult to bear for us french people. Like when people ask you where you come from and you say France, they invariably answer "oh, yeah, Fraaaaance, but we are making much better wine than you are, now!! And have you heard about our new wave Australian fashion? By the way, the Harbour Bridge is a much more beautiful piece of work than the Eiffel Tower..." and things like that. Cheese was left unhurt, but that's because I didn't mention it. Otherwise, everything you can possibly imagine is always much much better in Australia. (As a French, that would be wine and haute couture, but I'm pretty sure they'd claim the best schnitzels in the world if faced with an Austrian person.)

I guess what really gets to me in all that is the fact that it's mostly true. They are making better wine than we are, and they are richer, and they are extremely beautiful, and very impressive. So I need to be honest, I'm just jealous.

Sydney is a lovely city, which I loved, and which you'll love too, especially if you are a young, sporty person looking for a new place to stay. Australian people are also extremely welcoming and open minded, it's really lovely, and incredibly easy to meet new people, especially if you already have a little connexion in the country, because you're sure to meet all their friends in a matter of minutes. So go!
Publié par Claire à 12:47

A nice honest review of Sydney..neat work, this and the others !!!

Hey Avi! Thanks for commenting! Woohoo! Another post from someone I don't know! I'll soon achieve superstardom, I'm sure!

All the best, and thanks again!